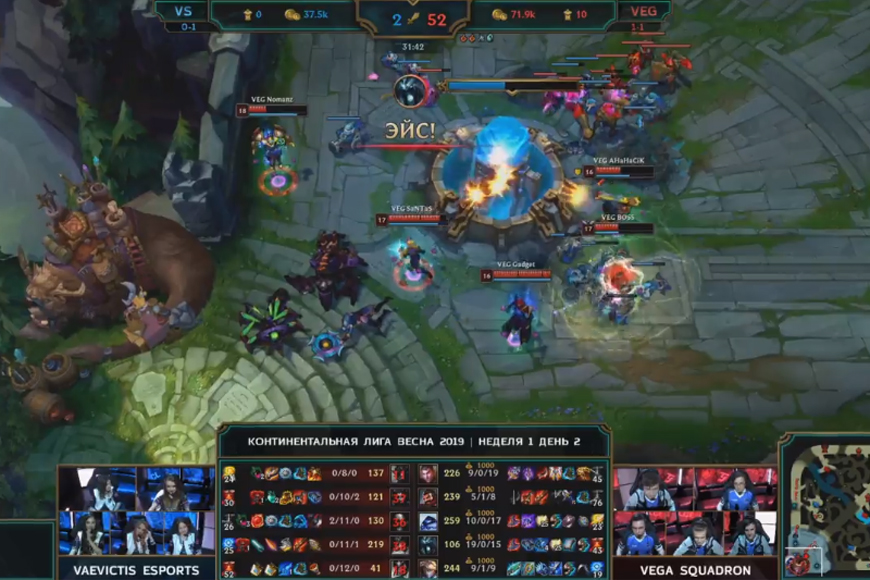 Last weekend, all-female League of Legends team Vaevictis Esports heavily lost their first few matches in the Russian LCL.
They lost one game to Vega Squadron where they died 52 times and only picked up two kills, and saw five support champions banned against them in the game versus RoX.
Continental League administration has now confirmed that both RoX and Vega Squadron players breached the league’s rules and also the Summoner’s Code and has handed the teams warnings.
RoX have been found to breach section 1o.2.4 of the Continental League Regulations Guideline: ‘Discrimination and humiliation of honour and dignity.’
This states that team members are prohibited from ‘insulting the honor and dignity of a country, an individual or a group of people by means of scornful, discriminatory or degrading honor and dignity of words, expressions or actions indicating race, colour, nationality, state and social identity, language, religion, political or other attitudes, financial and other status, origin, sexual orientation and other personal characteristics’.
Administration said in a statement: “In the game against Vaevictis, the RoX team banned 5 support champions during the pick/ban phase. Although formally this is not prohibited by the rules, Riot Games and the wider gaming community took this as a manifestation of disrespect for the players of the Vaevictis Esports team.”

“Although banning 5 support champions is not prohibited by the rules, Riot Games and the wider gaming community took this as a manifestation of disrespect for the players of Vaevictis.”
Continental League administration

For Vega Squadron, they were found to have breached section 10.1.1.2 of the guidelines (disruption of competitive integrity), which state that LCL teams are ‘always expected to play at full strength. Teams should avoid dishonest and unsporting behavior’.
In a verdict, administration stated: “Riot Games does not accept discrimination on the basis of sex or any other grounds and expects all players of the Continental League [to show sportsmanship] and respect for opponents.
“RoX and Vega Squadron players violated a number of Continental League guidelines, as well as the ninth point of the Summoner Code (‘to set a personal example’).
“RoX and Vega Squadron organisations received a warning from the Continental League administration, meaning a more serious punishment may follow in case of repeated violation. We have also warned other clubs that any manifestations of discriminatory behavior are unacceptable and will entail a reaction from the administration.
“We hope that these measures will allow players to understand the seriousness of the situation and change their behavior for the better.”
It is worth mentioning that the women’s team are of Diamond elo/ability in the game, compared to many other Grandmaster/Challenger players on the other teams. This point is regardless of their gender.
However, some in the League of Legends community are criticising Vaevictis management for putting together a team which is of a lower ability than other teams in the league.

If ROX get dinged for discrimination, Vaevictis management should be held accountable under the same ruling.

This story has drawn a lot of reaction from the community. Teams in the LCL Open Cup earlier today reacted by banning support champions only in an act of solidarity and rebellion against the ruling.

This is real and it is happening right now. pic.twitter.com/wDxqI43qTl

Others in the UK community had their say (both in our previous article) and below.
Vicksy, a high Diamond UK League of Legends streamer who has previously played in competitive UK tournaments, told Esports News UK: “I feel like the [formation of the] LCL team is an obvious publicity stunt. I also think it hurts women that actually want to compete – if you put 5 low Diamond/Plat male players in their position they would still receive this backlash, it’s even more so because there aren’t that many women that can compete to LEC standard.
“I also feel like the team that banned 5 supports vs Vaevictis did not deserve to be punished, that is what is going to happen when you bring 4 support mains into a competitive game, and with the 5th only playing 1-2 mid laners then the rest supports.
“They banned champions that are in their champion pool and played by multiple people. Heck, in LCS last year there was a requirement that you have to have held a peak solo queue ranking within the last year of Diamond 3 or above.”

“If you put 5 low Diamond/Plat male players in the same position as Vaevictis, they would still receive this backlash. It’s even more so because there aren’t that many women that can compete to LEC standard.”
Vicksy

Cordelia “Scarakye” Chui, social media and community manager for Ginx TV and Hearthstone streamer for Barrage Esports, likened the situation to that of Team Siren.
She said: “I remember the massive publicity stunt that Team Siren was and how they were totally exploited by the management who used them for viral cringe/exposure.
“Can you blame a team for taking an opportunity to be given a chance at a higher level? Any male team under the level of the rest of the field would do that too. But the difference is that their bad performance wouldn’t be blamed on their gender.
“People will be emotionally damaged by this experience for someone’s political play.”