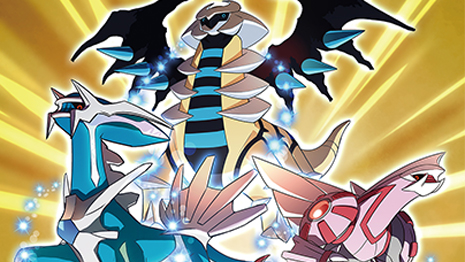 Pokémon fans will be able to get shiny versions of the following legendary Pokémon at select GAME stores in the UK and Gamestop in the US: Dialga, Giratina and Palkia.
These shiny legendary Pokémon feature alternate colour schemes compared to their regular versions, and can be downloaded by bringing along your DS or 3DS and a copy of Pokémon Black, White, Black 2 or White 2 to a participating store.

Shiny Pokémon are incredibly rare to find in a game as normal, whether in the wild or via an egg or an event-only Pokémon, so these limited-time special distribution versions are a welcome addition.
Shiny Dialga will be available between August 30th and September 12th, Shiny Palkia will be available between September 13th and September 26th, while Shiny Giratina will be handed out in GAME stores from September 27th to October 11th.
In the US, Gamestop stores will be giving out Shiny Dialga from August 19th to September 8th, Shiny Palkia from September 9th to September 29th and Shiny Giratina between September 30th and October 20th.
To get a free shiny legendary Pokémon, you’ll need to have the Pokédex and have no more than 11 Wonder Cards. To check you have enough space, switch the game on, select ‘Mystery Gift’ and then ‘Check Card History’. If you have 12 in there, just delete one to make room.
Nintendo also announced that in upcoming games Pokémon X and Y, certain Pokémon will be able to Mega Evolve mid-battle to an even more powerful state. After the battle ends, they’ll return to their usual self.
Mega Pokémon announced so far include Mega Lucario, Mega Mewtwo, Mega Blaziken, Mega Absol, Mega Ampharos and Mega Kangaskhan.
What’s particularly interesting about Mega Blaziken is that Nintendo is offering Torchic as a limited-time distribution over WiFi between October 12th 2013 (X and Y’s launch date) and January 15th 2014. It comes with a Blazikenite Mega Stone.
This Torchic also has the Hidden Ability Speed Boost, which increases its speed at the end of every turn – coming in handy when it eventually evolves into Blaziken and Mega Blaziken.
If you can’t wait for the shiny legendary Pokémon to become available, read our guide on how to catch a shiny Pokémon here.
You can also check out this Mega Pokémon trailer here:

I have to wait til August 30th.