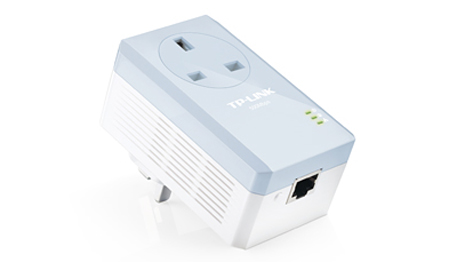 We all know that a wired Ethernet connection is better than a wireless one for using the internet, but how does using a Powerline adapter affect your online gaming experience?
We test out the TP-Link AV500, which lets you access your internet connection from a plug socket, to see how it handles PC and console gaming.

Product: AV500 Powerline Adapter with AC Pass Through (TL-PA451)
Producer: TP-Link
Release Date: Out now
Price: £29.99
Reviewer: Dom Sacco
Sometimes it’s just not possible to use a wired internet connection for your games console or PC. Your router might need to stay downstairs near your home’s central phone line, for example, and you certainly don’t want to have a 20-metre Ethernet cable running through your hallways and up stairs to your gaming room.
Maybe you have a splitter and a separate wire running from your main phone line to second connection point in the house. But we’ve found that plugging your router into this can also be problematic – the connection is not quite as fast or as strong as it would be if your router was directly plugged into the main phone line.
This means a lot of gamers – like ourselves – have to resort to using a wireless internet connection. The problem is, they’re just not reliable enough. The connection will get weaker the further you are away from the router, plus you’ll be competing with other devices in the house such as your housemates’ tablets or smartphones. This means that you could get disconnected just before you’re about to beat someone at FIFA online – and get 0 points instead of 3 – or suffer lag when playing Call of Duty at a vital time, resulting in your death in-game.
Thank God for Powerline adapters then. What the hell are they? (we hadn’t even heard of them ourselves until a few months back). Basically, these let you run an internet connection through your plug sockets. It sounds weird, but it’s simple, cheap, safe and most importantly, works.
We can’t stress how simple it is. Taking the TP-Link AV500 out of the box, all you get is a couple of Powerline plugs, an Ethernet cable, a resource CD (which you don’t need) and a quick-start guide. There’s no hefty instruction manuals and you don’t even need to analyse the quick-start guide.
Just use the Ethernet cable to connect your router to one of the Powerline adapters, then plug it into a plug socket and switch it on. Then, plug in the other Powerline adapter into a plug socket near your gaming devices. Switch it on, and connect an Ethernet cable from the bottom of it to your games console or PC. Hey presto – you’re done.
You have to make sure both the adapters are switched on to pick up the connection in your games room, but that’s as taxing as it gets. Another plus-point is the fact that a Powerline adapter doesn’t even take up a valuable free plug socket space, which you could need for your DVD player, Sky box or whatever else. Each adapter has its own plug socket on its front panel, so you can plug another appliance into it. You can even plug your router into the adapter to power it (see picture, above).
We’ve been using our Powerline adapters for more than a month now, and have only had one or two very minor lag spikes during one match of League of Legends. We game a hell of a lot here at Leet Games Blog, and can safely say these are more than good enough to game with online, whether you’re playing an FPS, MOBA, MMO, sports game or whatever else.
We have a Sky Broadband Unlimited connection, with an average download speed of 4.68Mbps and 0.69Mbps upload speed, with a ping of 30ms.
There is one small downside to using the TP-Link Powerline adapters – they only have one Ethernet port. That means if you have a PS3, Xbox 360 and PC on the same desk, you’re going to have to switch Ethernet cables each time you want to use a different machine. But that only takes a few seconds of your time, so we can’t really complain like an angry FIFA player who’s just been disconnected for the umpteenth time…
The quick-start guide also states that moving one adapter to a different plug socket may cause the connection between the other to cut out, but we haven’t yet had that problem. If it happens to you, all you have to do is press the ‘pair’ button on one adapter for one second, then press the ‘pair’ button on the other one to re-connect  them. It also states that nearby air-con and washing machine units can interfere with the devices, but you’re not going to be playing your Xbox 360 in the kitchen (unless you are the cookie monster, of course).
Verdict
An essential purchase if you love online gaming but your wireless router or the size of your house is stopping you from getting a strong internet connection.
9/10
Pros: Easy to set up, no noticeable drop in connection speed, lets you game in a room far from the router, affordable
Cons: Remembering to switch the adapters on whenever you want to use the internet, only one Ethernet port per adapter

hi. i was thinking about getting a set of these for my gaming setup which is upstairs because i don’t like wireless.. i have a xbox 360 downstairs which my brother plays on via a wired connection, so will this be same the if i have one the adpaters in my room and connected via a ethernet cable ?.. also i was wondering can other people still use the wireless for a laptop from the router even tho theres a powerline adapter connected it ?, bascially can wireless still be used for other devices at the same time as when… Read more »

Hi Ciaran,
Yes the wireless router can still be used when you have ethernet plugged in via the Powerline. I use the wireless internet on my phone, for example, while I’m gaming on my PC using ethernet from the Powerline. You can access wireless with a laptop or any wireless device.
And yes, you can have your xbox downstairs and another device upstairs using Powerline. For example I have my router downstairs plugged into my smart TV via ethernet, then the router connected to the powerline in the plug socket.
Hope that helps.
Dom

thanks, this is excatly what i wanted to no thanks very much and good guide will be purchasing a set of these.

The problem of one ethernet port can be easy solved with a switch, of course 😉

what do you mean matt ?

He means 1 ethernet port in, lots of ethernet ports out.
I have an old router plugged in on the other side of the house via powerline, to not only provide multiple ethernet ports, but boost the wireless signal too, works very nicely. (plenty of online guides for this)

so im a competitive gamer on cod, and i use wireless which sucks cause i always lag in the middle of an important kill. i was really thinking about buying a modem and a router, putting it in my room and running wired. but if i were to just get this power line thing would i just have to get a router?? plz reply thank you(:

Hey Dom I have a similar situation, I’m planning on buying one because we have a wireless extender. I use Internet from my father in laws house which is about 100 feet away would this work? We are both sharing the same electricity as well 🙂

Hi Richard,
Yes it should do. You can plug one powerline adaptor in his house (near the router) and one in your house. Are you sure you’re sharing the same electricity? That sounds odd.
Hope you get it working.
Dom

HI,
if use the adapter upstairs and play wired for my xbox one will my internet be effected for the other devices connected to it wireless

Hey Dom, the post says remembering to turn them on every time I want to use the internet. I assume I NEED to turn it off every night and on in the morning if I want to use it, and then off again before I go to school? That’s odd, why can’t it stay on all the time? If my computer is in its normal sleep mode when I’m away from it, then no internet is being received from it if its asleep, do you just say to turn it on and off to save electricity?

Hi Tyler,
You can keep them on all day if you wish. I leave the main one connected to the router on, then turn the one near my PC off each time I turn my PC off, but you don’t have to do this.
Dom

Hey Dom, i have a 3 story house and my wifi is in the middle floor. i play xbox one downstairs, but the lag is so bad that i can rarely play. Would these adapters boost my signal enough that i can go from a 1 bar to maybe a 3 to 4 bar? Thanks.

Hi Nolan,
This doesn’t boost a WiFi signal – it takes the internet from your router and makes an Ethernet access point wherever you plug it in in your house. So put one powerline next to your router, then the other powerline near your Xbox. You will get a wired connection so won’t need to worry about wireless lag.
Hope it helps.
Dom

No, you can leave them on.

Thanks Dom. I recently purchased a powerline adapter, but it wouldnt connect to my xbox one. It said i needed three. Both lights came up green, but it said services unavailable on xbox. Is there any other way to reduce lag?

Thanks Dom. I recently purchased a powerline adapter, but it wouldnt connect to my xbox one. It said i needed three. Both lights came up green, but it said services unavailable on xbox. Is there any other way to reduce lag? Do u have to plug an ethernet from ur xbox to the adapter?

Nolan, I’m slightly confused by your comment. What said you needed three? And three of what?
Yes you need to connect an ethernet cable from the powerline to the Xbox. Have you set up both powerlines correctly?

Just bought one of these…in the hope that my wifi will be good enough to stream after. Honestly the data plan is probably not that good but still hoping it will be good enough. It has an average link speed of 63-72mbps whatever that means only get 9mbps download speed 0.80 upload when lucky! Also router is.close to my room!