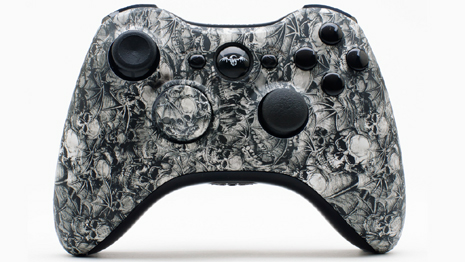 Avenged Sevenfold (A7X) has teamed up with Scuf Gaming to launch a pro Xbox 360 controller branded with the metal band’s winged skull imagery: The SCUF Avenged.
The Avenged Sevenfold 360 controller comes with a certificate of authenticity signed by members of the group, and it can be customised online to include remappable buttons, extra paddles, a SCUF grip on the back of the controller, removable rumble packs, wireless technology and trigger stops (that promise to remove any delays between pressing the trigger and the game reacting). Each one has personalised A7X paddles.

The price starts at $139.95 and can go all the way up to $229.20 with extras added on (plus $32.45 in international shipping if you live outside the US). It’s designed for pro gamers with a focus on shooters such as Call of Duty and Gears of War.
Avenged Sevenfold’s lead singer M Shadows is a big Call Of Duty gamer himself and has been using SCUF controllers since early 2012.
He said: “Since using SCUF controllers I was hooked and I’m delighted, after many talks, we are finally releasing the SCUF Avenged. This controller is rad, not only because it looks amazing, but it actually improves your gaming – this is a perfect addition and something we are excited to endorse.
“I’m sure this will especially appeal to our fans so I agreed we would give each person a signed certificate who purchased a SCUF Avenged.”
Duncan Ironmonger, CEO of Scuf Gaming, added: “It’s an absolute pleasure to be working with M Shadows and Avenged Sevenfold and to have been given the opportunity to create a controller for such a prestigious, gaming savvy band. It is all the more rewarding since seeing his team compete at the highest level at MLG Anaheim in late June – it feels like a perfect addition to our controller range and I’m sure Avenged Sevenfold and gamers alike will love this controller.”
The original SCUF controller was invented in 2010, which features a re-engineered back with paddle buttons, which mimic the front buttons. SCUF controllers are legally approved for use at most major competitions including MLG, EGL, WGL, Reflex, UMG, ESL and more. SCUF says it hand crafts, finishes and tests every controller at its workshops in the US and UK, giving gamers the ability to customise their controller to suit their gaming style.
85 per cent of the “top pro gamers” use a SCUF to play Call Of Duty, claims the company.
Avenged Sevenfold will release their sixth album ‘Hail To The King’ on August 27th. The group previously recorded songs especially inclusion in Call of Duty games.