Fnatic, one of the biggest esports esports organisations in the world, had their account removed from Twitter earlier today.
The social media platform has now reinstated the verified account, but for a couple of hours Fnatic were completely without a central Twitter presence – and 1.2m followers – due to a Twitter boo-boo. 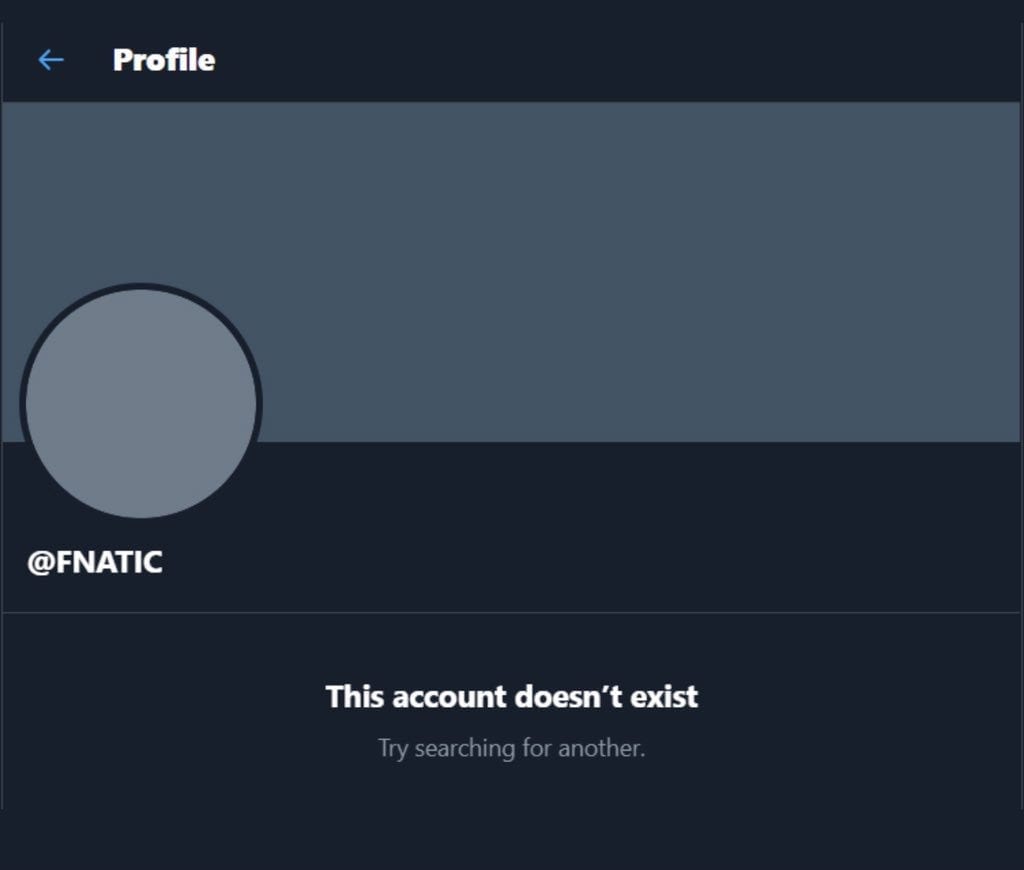 It seems that someone at Fnatic may have changed their account’s birthday in Twitter’s settings to the date the org was founded: July 23rd 2004.
As Twitter’s terms of service states that users must be aged 13 or over at the time of creating their account, this may have made it appear to Twitter that Fnatic were younger than 13 when they first set up their account.
Twitter then simply closed the account automatically, leaving many in the esports industry left scratching their heads.
Fnatic founder Sam Mathews tweeted:

Halp @Twitter Can we have @fnatic account back?! Can assure you I was 19 when I started it!

“Our Terms of Service require everyone who uses Twitter to be 13 or older, and we have determined that you did not meet the minimum age requirement at the time this account was created.”
— Sam Mathews (@sammathews) August 13, 2019

It raises questions as to Twitter’s terms of service and methods it has in place to prevent this kind of thing happening to other similar brands in the future.
It seems Twitter’s age rules are designed with individuals in mind, rather than brands or businesses.

Since being reinstated, it seems that Fnatic only has around 3,000 followers at the time of writing, however it’s understood this is just a visual bug and the 1.2m followers number should be back again soon.
For example, Esports News UK was following Fnatic before the wipe, and our Twitter account is still following them now without us needing to manually re-follow.
Of course, the incident opened Fnatic up to a lot of banter from the esports community, with other orgs and rivals taking the opportunity to have a laugh at the London-based organisation’s expense.

Before deciding to leave Twitter, @Fnatic sent us this letter. Please respect their last wishes, that’s the least you can do.

You will be missed friends. pic.twitter.com/2FaRgXL5yB
— Team Vitality (@TeamVitality) August 13, 2019

So… this means we’re bigger than Fnatic, right? ? pic.twitter.com/WOInIgIqbD

About to hit 3,000 followers. Thanks for all the support, guys, we couldn’t have made it this far without you. #ALWAYSFNATIC ??

Guild Esports announces its biggest ever sponsorship deal worth £4.5m with Bitstamp after reaching V...
Chemtech drake could be removed from League of Legends: Riot to survey players before making a decis...
FaZe Mongraal becomes the most talked-about esports player on Twitter
Dom Sacco