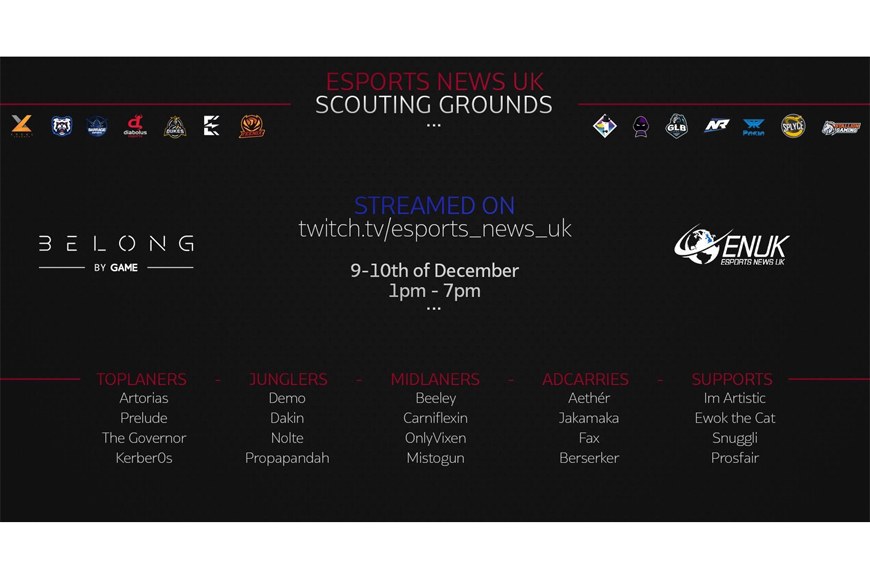 Esports News UK is delighted to be backing the UK League of Legends Scouting Grounds tournament which takes place this weekend.
It’s the idea of coach Josh “Furndog” Furneaux, who wanted to organise a UK Scouting Grounds tournament for League of Legends players to showcase their skills, and to help organisations find new talent.
It gets underway on Saturday December 9th and Sunday December 10th from 1pm to 7pm. Furndog and casters Derry “Dezachu” Holt and Jake “Hiprain” Matthews will be streaming to the ENUK Twitch channel live from GAME’s Belong Arena in Bristol, while players will be playing online remotely.
League of Legends developer Riot Games will also be supporting the event with some RP prizes for participants.
Esports News UK will be covering Furndog and the casters’ travel and accommodation expenses.
There are 20 players taking part, whittled down from a list of 50 applicants. You can see the full list of Scouting Grounds players here.
Some in the community have expressed their desire to see all 50 players taking part, but Furndog points out it would be difficult to stream and keep tabs on all 50 with an event this size for now.
“In the future this could be a bigger event if it receives sufficient interest, and will therefore be on a larger scale,” he said. “But for now we’re piloting it with 20 players.”
“The current format will allow for all players to play vs all laning opponents twice on different teams each time.”
Tune in to the ENUK Twitch channel to watch the UK Scouting Grounds live this weekend, on Sat Dec 9th and Sun Dec 10th, from 1pm-7pm