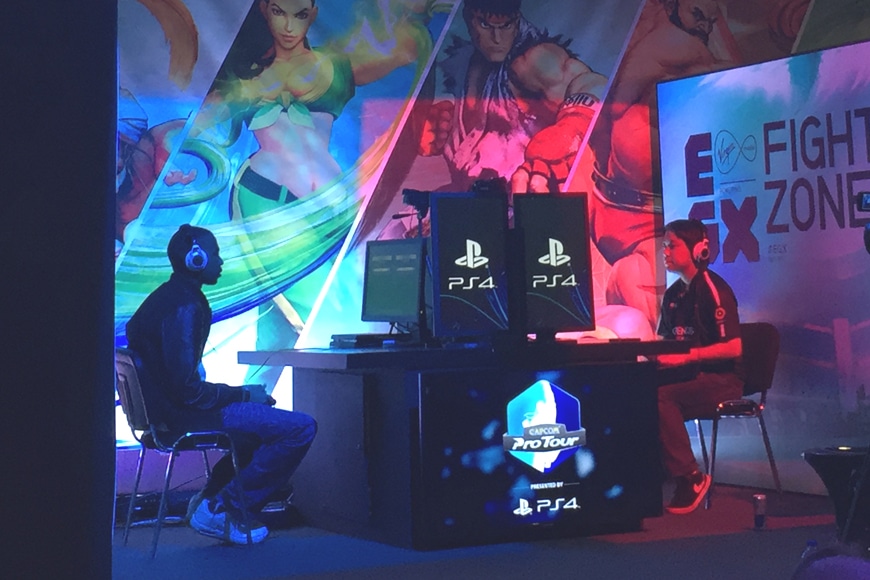 The Capcom Pro Tour took place at EGX in Birmingham last weekend, and not only was it fantastic to watch as a spectator, but the way the pro Street Fighter V players conducted themselves was second to none.
Dominic Sacco shares his opinion on why the unique community is so strong, what other eSports scenes can learn from the pros’ level of dedication and respect, and how competitive Street Fighter is winning him over.
Team EnVy Us take the first game against Mousesports in the Gfinity CSGO Invitational, and during the break, I decide to have a wander and see what else is around.
I don’t have to look far, because a roar of the crowd at the Capcom Pro Tour stage instantly piques my interest.
I have to apologise to the CSGO staff and teams here at EGX today – I didn’t watch another minute of CSGO beyond this point.
British Street Fighter V player HF UM Hurricane is playing on stage, tearing into his opponent as Cammy. A string of impressive combos gets the crowd roaring again as the game comes to life, and I find myself wondering why I don’t watch top-level Street Fighter matches more often.
Hurricane eventually beats MD Mister Crimson 2-0, and the organisers take a break for a few minutes ahead of the next match. This is the $15,000 Capcom Pro Tour, the winner of which will automatically qualify for the Capcom Cup, a tournament featuring 32 of the world’s best Street Fighter V players.

“This is not your typical clique group. This is a tight-knit collection of both friends and rivals, with mutual respect and admiration for one another. There are no boundaries.”

We’re not even into the final 16 and this place is already packed. Almost all of the seats (some 100 or so) are taken, and a crowd is spilling out onto the edges of the spectator area and around the booth itself.
I decide to mill about and chat to some of the players and fans. I luckily come across Femi “F-Word” Adeboye, a player/caster well-known in the UK scene, who gives me the lowdown on the tournament bracket and who is performing well so far.
F-Word tells me that all the Americans have been knocked out, and it’s pretty much Europe versus Asia at this stage. There are also a ton of UK players still in the tournament, including Problem X, Packz, Infexious and UK scene veteran Ryan Hart.
Top Asian pros still in the tournament include Nuki, GamerBee and well-known pro aigo Umehara (who was responsible for this – possibly the most famous competitive Street Fighter play ever).
I look around to see several of the pros chatting to one another – it’s clear that a lot of these guys already know each other well. But as I discover throughout the day, this is not your typical clique group. This is a tight-knit collection of both friends and rivals, with mutual respect and admiration for one another. There are no boundaries between the different regions and rivals.

It sounds like a cliche, but this seems to be more of some kind of fighting game family than just a group of players.
There is also a much broader range of experience across the board. GamerBee, Ryan and Daigo are in their thirties, but some of the younger British players are in their teens and twenties. It’s of stark contrast with the League of Legends scene, where it’s not unusual for players to retire in their mid to late twenties.
Back to the on-stage action, and Britain’s ProblemX is up against Japan’s Nuki. After a close-fought match, ProblemX loses 2-1 and is eliminated from the tournament.
He shakes Nuki’s hand after the match, the home crowd applaud Nuki and ProblemX returns to the spectator area without a flinch. I applaud the sportsmanship at hand.

“There is just something about competitive Street Fighter that, for me, other eSports games can’t match. It’s very raw, intense and the one-on-one match-ups make for some exciting plays that often surprise even the top-level pros.”

While there is a solid level of maturity and dedication here, this scene is not without its humour.
ProblemX is soon challenged by another player in the crowd, but this time it’s not a virtual fight between the two – it’s a bet. The player bets ProblemX a fiver that Phenom will beat GamerBee. Phenom swiftly loses 3-0, but it’s all smiles after the match even as the loser hands over the dough.
Later on, during the top 8 match between Hurricane and Onuki, Hurricane introduces a bit of friendly trolling in the match, constantly flipping to the left side of the screen repeatedly. It draws some laughs from the crowd, and is nice to see that the scene doesn’t take itself too seriously.
The casters and crowd were also on form, and were more than happy to get involved with the banter. I lost track of the number of times “oh my days” was uttered (whether genuine or with sarcasm) and the fun interaction between the crowd, casters and players regularly brought a smile to my face.

After losing 3-0 to GamerBee in the winners bracket final, Ryan Hart faced another test – Nuki in the losers bracket final.
While he didn’t start off that great, Ryan came back into the match, and despite appearing to be frustrated following Nuki’s fight stick problems, showed incredible focus and steely determination to eventually take the victory 3-2.
It was GamerBee who emerged triumphant on the day though, but Ryan has already identified the areas he needs to work on from here. You can read more from our Capcom Pro Tour EGX Sunday match report here.

“British Street Fighter V player HF UM Hurricane is playing on stage, tearing into his opponent as Cammy. A string of impressive combos gets the crowd roaring again as the game comes to life.”

Overall, I am left seriously impressed with my brief experience of the solid Street Fighter community and eSports scene.
There is just something about competitive Street Fighter that, for me, other eSports games can’t match. It’s very raw, intense and the one-on-one match-ups make for some exciting plays that often surprise even the top-level pros.
It’s a game of skill, speed and determination. There are no teammates to rely on, there are rarely any seriously boring, long drawn-out games – it’s all down to yourself and your mental ability to outwit the opponent. You really have to believe in yourself to win. Of course, it also has that heritage (next year the original Street Fighter arcade cabinet turns 30 years old).
But for me it’s the mutual respect, determination and level of maturity from these Street Fighter pros that other eSports scenes and players can really learn from. The next time there’s a competitive Street Fighter tournament running, I urge you to give it a watch.
Even if you’re not a fan of fighting games, you might just surprise yourself, learn something new, or find yourself cheering like a madman when that ultimate finally connects and the player you’re certain had been defeated somehow ends up winning. 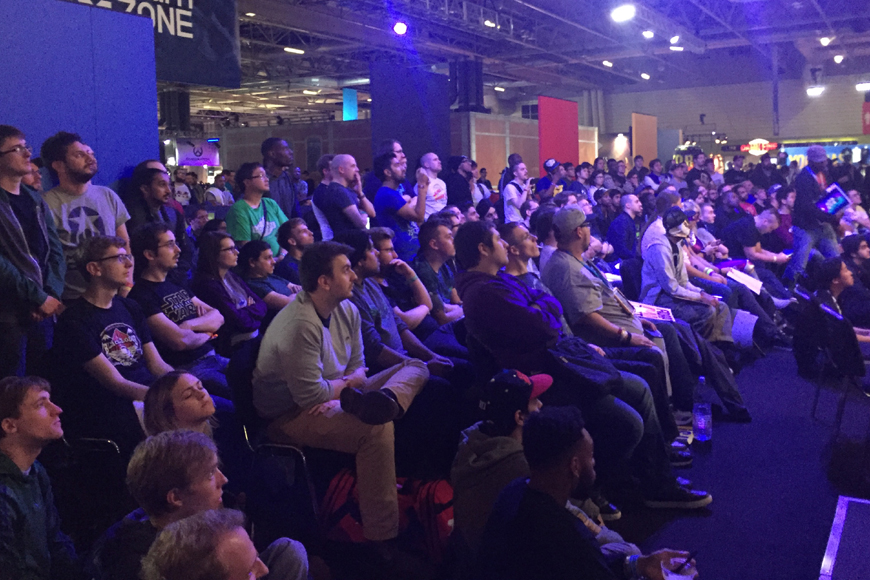 The only people that actually watch and enjoy ‘competitive league’ these days are the 8 – 14 year old bronze garbage that are in awe of watching EU and NA get completely demolished by Asia. Shame these kids will never understand what real competition is about. 1v1 FGs.

[…] Fighting spirit: What we can all learn from the UK Street Fighter V community […]