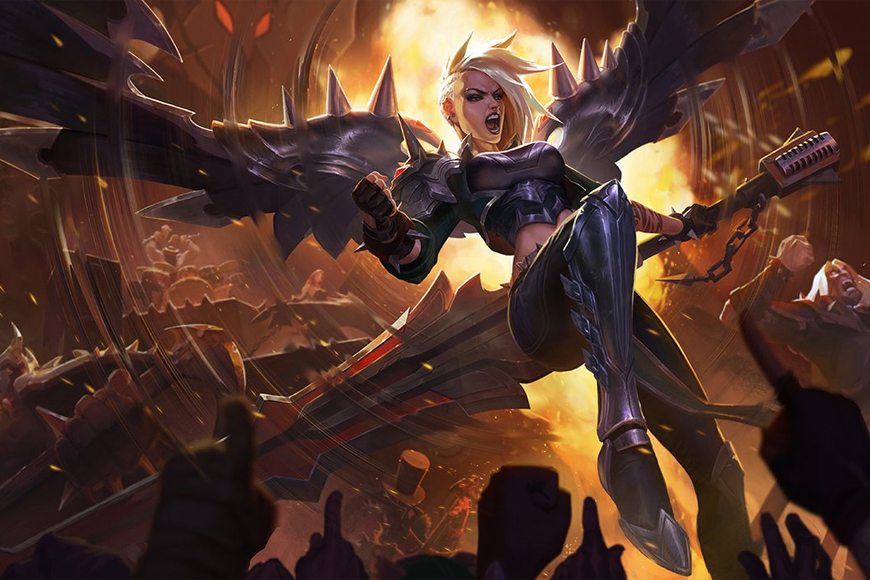 League of Legends’ virtual rock band Pentakill return with a third album, Lost Chapter, and an ambitious live concert. Esports News UK editor Dom Sacco reviews the highs and lows of both, with Kayle and her IRL vocalist Noora Louhimo arguably the star of the show

When Kayle’s original Pentakill skin was launched a few years ago, it earned the nickname Pentakayle by some in the community.

The top-lane late-game monster joined the Pentakill virtual band line-up as a vocalist, joining the likes of bassist Yorick, lead vocalist Karthas, synth player Sona, drummer Olaf and guitarist Mordekaiser. However, despite receiving an awesome in-game skin, she wasn’t in the limelight much, and the second Pentakill album was much like the first, with a few more epic tracks.

Noora Louhimo lended her vocals to Tear of the Goddess a few years ago, but that largely featured her calm, tranquil singing, and not so many screams which could show off what she’s capable of.

It’s been a few weeks since this new album dropped, and I’ve taken the team to let the songs breathe before reviewing this. So let’s dress up in black, raise our devil horns and jump in.

I’m pleased to say that Kayle is the star of the show this time around. Brought to life through the vocals of Battle Beast singer Noora Louhimo, she adds an extra oomph to a number of tracks on Pentakill III: Lost Chapter.

Namely, anthem Gathering Storm, penultimate track Redemption, an upbeat, bassy and funky number which boasts some beautiful guitar licks in the intro and a style that reminds me more of AC/DC than heavier metal, and finally, the stand-out song: Stormrazor.

“We’ll take up arms, we’ll make amends here,” Noora cries during the chorus. “Where they bring death we must remain: Defiant. Relive the pain and turn it on them, ’cause we must live up to our name.”

Her vocals on Stormrazor are just incredible. Kayle’s growl at the start sets the pace for the rest of the song; her scream that bridges the first chorus into a shredding solo supported by rapid-fire drum beats will melt the skin off your face. And the choir-like background vocals, blistering second solo and chugging guitar riff outro make this track my personal favourite from the album – and one of Pentakill’s best to date.

This is to take nothing away from Pentakill’s main vocalist Jørn Lande, voicing Karthus, or the other contributors and musicians involved this latest album. That trademark Pentakill feel is here right from the off, with impressive opening title track Lost Chapter, and there are a few new twists which I admire.

Edge of Night is a slower-paced anthemic number featuring new Pentakill band member Viego, which I’ve no doubt will pull in the poppier music fans out there, and the acoustic version of Lightbringer, the first track from Pentakill’s debut album, is sublime. Executioner’s Calling is an experimental prog rock-style track with a nice chorus, but it fades out far too quickly – I wanted a ten-minute epic damnit!

Lost Chapter isn’t perfect. There are some more forgettable songs, like Conqueror and Aftershock, and the record is a bit up and down, a bit hit and miss at times. I’ll be honest, I’m not a big fan of the new Lost Chapter Pentakill skins and the addition of Viego, I prefer the original skins, but to each their own.

Anyway, back to the music. Is this better than debut album Smite and Ignite and second album Grasp of the Undying? It’s hard to say. I’d probably place them all equally. For me, Pentakill’s best is yet to come.

I would like to see more experimentation in the future, why not bring in a few guest League of Legends champions to add a mix of genres? Vi could contribute to a more punk rock song, Amumu could get involved with an emo track, Kindred and her wolf could give us some death metal, for example.

Get well-known musicians to contribute, aim high, get us a James Hetfield, a Dave Mustaine, a Slash!

However, for an album that is completely free, which adds to the constantly evolving world of Runeterra and gives us all more League of Legends fan service, I can’t complain. This is another good addition to Pentakill’s growing repertoire of music, and I know they are capable of delivering an outstanding one in the future.

Pentakill interactive virtual concert review: An ambitious if unusual attempt at something new

The virtual concert premiered on Wednesday September 8th 2021 and allowed fans to interact with the experience.

Before the concert, fans who signed up were assigned onto one of three teams: the mad ones, the immortal ones and the deep ones.

There was a Zoom call for fans to congregate, raise their fists and be featured in the actual concert at points while it was playing out. Viewers could also mash their mouse button during quick-time events to rack up points for the force they were fighting for. You can watch it back here:

The interactivity was a nice touch, even if the whole thing felt a little scripted – though I wasn’t bothered by this.

The story was interesting, with a rather frightening face in the sky threatening to destroy the world below – including the stage.

It’s impressive that actors’ movements were captured using motion capture, but I couldn’t help feeling the expressions on the characters were still a little lifeless at times and that threw me off.

Listen, I know this is a virtual rock band, and I’m not expecting the world. The teams did a fantastic job, I just personally found the realistic style of the animated characters a bit… odd. It felt less like League of Legends to me and more like a story version of Guitar Hero.

While Kayle was the star of the album, here it was Mordekaiser.

The League champion caught the attention of fans after turning into a giant, strutting his huge behind and punching Viego in the face.

There was another nice touch where Pentakill broke the fourth wall, saying to the streamer: “”The old songs are dead, you hear that Tobias Fate, Pentakill are gone.”

Overall, the interactive concert was ambitious and impressive, and I look forward to seeing what Riot does along these lines with its other music and experiences in the future, and to see what notes other developers take from this experiment.

Pentakill are back, and I can’t wait to see how they rock our socks off next time.