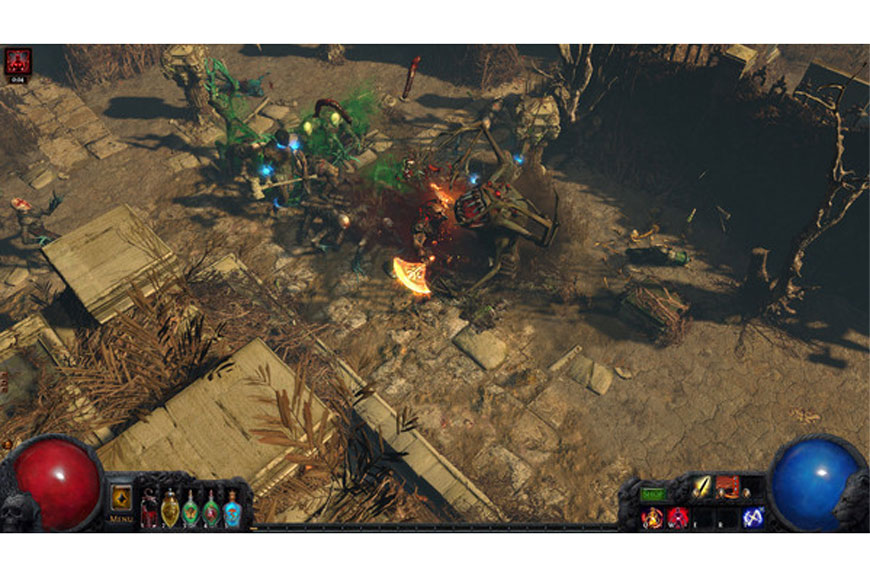 On your exile’s path to redemption—and subsequent immortality—you’re bound to have your fair share of deaths. That’s the way it is in any MMO, and Path of Exile is no different.
The macabre continent of Wraeclast is strewn with monsters of every conceivable size and form, after all. You’re bound to get dismembered by ghastly creatures at some point. Luckily, death isn’t final in PoE, nor is it that big a deal, as you can get do-overs in the standard leagues.
If you go into Hardcore mode, though, things can get really hardcore. Still, death is death, and you’ll want to avoid in-game encounters with the grim reaper as much as possible.
To prep you for all the possible scenarios where your character can meet an untimely end, here’s a look at the main causes of death in the wonderfully savage world of PoE. I’ve even thrown in a few tips and tricks to help you to avoid, overcome, and ultimately survive the threat of ill-fated endings—temporary as they may be.

Let’s start things off with a bang, shall we? There may be no type of death that gets deeper under a player’s skin than those caused by desyncs. I mean, let’s face it, dying as a result of your own actions is one thing; having your screen freeze in the thick of the action, only to unfreeze when you’re near death or lying in a pool of your own blood is another story altogether. Unfortunate desyncs, and even minor lags, are enough to turn even the most civil gamers into full-blown ragers.
How to avoid it: be realistic. Set your graphics at a level that your hardware can handle. While this isn’t a fool proof guarantee, it can help minimize the occurrence of lag. Additionally, you can also try pausing after major battles. This will allow the game to resync for the next batch of fiends.

What’s worse than a quick and painful death? A slow and certain one, of course! There’s something about the sluggish certainty of a looming demise that can cause even the most experienced gamer to act like a caged rat—frantic and hopelessly erratic. Corrupted blood has just that effect, as it is a type of debuff that causes continuous bleeding of your character’s life.
How to live through it: while armor does nothing to prevent bleeding, other sources of physical resistance, such as Immortal Call or endurance charges, will do you good. Alternatively, you can also use a staunching flask to remove existing Corrupted Blood stacks. Doing so will prevent any more corruption from being added while the flask is in effect.

We know. According to Gamer Logic 101: Death is never your fault, right? But let’s get real for a minute. If it isn’t your fault, whose is it? You’re the one in control! It doesn’t matter if you got distracted IRL, or if you happen to be nodding off from long hours of grinding for PoE currency, the bottom line is that it is your fault. Sloppy play, for one reason or another, will get you nowhere.
How to survive it: focus on your game and treat in-game death with the finality of its real-life counterpart. It’s that plain. It’s that simple.

Poor passive skill design is an all-too-common strategic flaw in PoE. Sometimes players tend to focus on building their offensive sets to the point that they neglect their defense.
While it’s easy to go this route and leave the defensive aspect to PoE items and gems, the truth is that this can prove rather costly—most notably when you reach tough bosses who can drop your life bar from full to empty in a single stroke. In fact, even strongboxes can cause the untimely demise of a reckless exile this way.
How to avoid this: study, study, study! Don’t go on a one-note pattern with the passive skill tree. With all the video tutorials and other guides at your disposal, there’s no reason not to have a sound strategic approach to passive skill building.

Bosses are bosses for a reason: they’re big, mean, killing machines! Charge headfirst into a boss fight and you could meet your maker in a heartbeat. Launch a half-hearted attack and boss minions are sure to swarm you, making you an easy target for the big baddie. So what do you do?
How to triumph over bosses: preparation is key. While it’s fairly common to die at the devilish hands of map bosses, you can negate it by wielding boss-worthy weapons, treading carefully, and making sure your flasks are full and ready. Also, be wary of map affixes, as they can mess with you big time.

In Wraeclast, death isn’t so final after all. Just the same, dying repeatedly is a rather nasty experience that saps the fun out of gaming. You’d do well to avoid it.Keep these things in mind and you’re sure to have a better all-around experience traversing Wraeclast’s landscapes.
Stay posted for more updates on the wonderfully savage world of PoE!