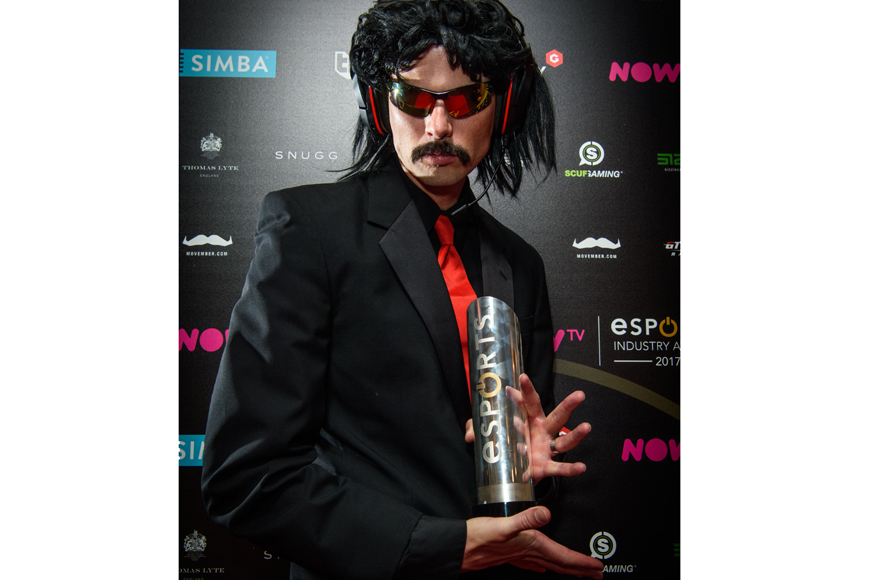 Popular streamer Dr DisRespect (real name Guy Beahm) was on fine form at the 2017 Esports Industry Awards in London yesterday evening.
He won the Streamer of the Year award, beating the likes of Paul “Ice_Poseidon” Denino, Christopher “Sacriel” Ball and last year’s winner Michael “Imaqtpie” Santana.
The Twitch streaming giant was in character throughout the evening, rocking a gaming headset and his trademark glasses, regularly licking his fingers and coming up with catchphrases. He was accompanied by Nurse Disrespect.

Dr DisRespect also gave a surprisingly poignant speech after receiving his award. He mentioned how he’s providing an outlet for people going through hardships and spoke about how that makes him feel:

“I’ve realised I’ve provided an outlet for a lot of people that are dealing with hardships,” he said. “And it makes me proud.
“So all the people that are dealing with that sh*t, let’s get through it. One step back, two steps forward. Let’s climb the mountain, let’s dominate.
“Violence, speed and momentum and guess what. We’re at the tip of the top of the mountain. But we’re really only halfway up.
“Let’s do it baby! Thank you.”

He was just generally in fine form throughout the night – here are some more pieces to camera and footage of the good doctor himself:

The leader of the #slickdaddyclub winner of Esports Streamer of the Year @DrDisRespect is backstage at the #Esportsia pic.twitter.com/IAXUhfBX4u

The winners in full

The 2017 winners were as follows, including four individuals from the UK highlighted below:

Last night saw guests from the world of gaming, entertainment and sport come together to celebrate the second annual NOW TV Esports Industry Awards.
There were over 600,000 votes cast in total this year, and hosts Julia Hardy, Nicki Shields, OJ Borg and Adam Savage presented the winners with their awards.
Megan “RheingoldRiver” Cutrofello (Unsung Hero of the Year) and League of Legends presenter Eefje “Sjokz” Depoortere (Personality of the Year) became the first women to scoop Esports Industry Awards.
Even legends like Big Narstie and Akinfenwa were in attendance.

Tom Mercey, director and co-founder of the Esports Industry Awards, said: “Global recognition and awareness of esports has absolutely exploded over the last 12 months and that has been reflected in the amazing support we’ve had for our awards this year.”
“We created the awards to celebrate everyone who contributes to making esports such a global phenomenon and we’re thrilled to have been joined by so many leading lights of the industry this year as well as celebrities from the world of music, film and TV.”
You can see the 2016 Esports Industry Award winners here