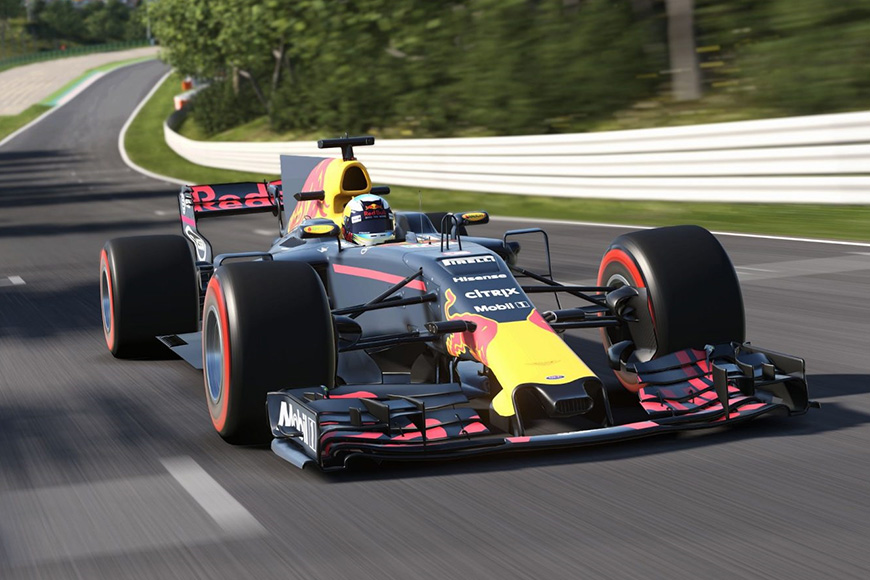 Esports News UK editor Dominic Sacco shares his thoughts on today’s news regarding the Formula 1 Esports Series.
Racing games are a big of an enigma in the world of esports – they’re currently seen as a specialist niche rather than a widespread hit.
While the likes of Forza, Project Cars and Gran Turismo are all very impressive titles, it’s fair to say they haven’t yet set the world alight in esports.
Today’s announcement hopes to change that. F1, event provider Gfinity and game developer Codemasters have  teamed up for the Formula 1 Esports Series, an annual tournament using the new F1 2017 video game on PS4, Xbox One and PC.
The signs were there a few months back, when Codemasters was looking to hire an esports manager and designer.
Qualification starts in September to determine the fastest initial 40 drivers. Then, semi-finals will be hosted at London’s Gfinity Arena on October 10th and 11th. The top 20 will advance to the finals, taking place at the Yas Marina as part of the 2017 F1 Abu Dhabi Grand Prix on November 24th and 25th.
The winner will qualify for next year’s semi-finals and attend a 2018 Grand Prix, as well as become a virtual character in the F1 2018 game out next year.

“Will F1 fans want to watch a virtual version of the motorsport, and what about traditional esports fans? There’s great potential here, but time will tell.”

It’s no surprise to see F1 attempt to get involved in the esports space. It’s an ideal way for it to reach a younger, digital-savvy generation, opening up new sponsorship, marketing and revenue opportunities.
Sean Bratches, MD of Commercial Operations at Formula 1, said: “This launch presents an amazing opportunity for our business: strategically and in the way we engage fans. First, it’s a growing category with tremendous fan engagement that we’re entering in a big way, and we’ll continue to evolve and innovate in the way we run this virtual counterpart to the F1 Championship.”
Earlier this year McLaren announced its own World’s Fastest Gamer tournament, with the winner receiving a contract with McLaren to become one of its simulation drivers.

Where will the winner of McLaren's esports competition work? (behind the scenes HQ tour & video interview)

Football clubs like Manchester City, West Ham, PSG, Schalke and more have been getting involved with esports for the same reasons. Just this summer Liverpool announced it’s hiring someone to develop an esports programme.
But can F1 make it in esports? Games like League of Legends, CSGO and Dota 2 lead the way in terms of viewer numbers, and I’m not sure virtual motorsports will attract the numbers a huge brand like F1 will expect.
Yes, they will be able to push it via the real F1 ecosystem and races, but do F1 fans really want to watch a virtual version of their favourite motorsport?
Likewise, do typical esports fans want to watch this kind of esport? Perhaps it’s possible for both demographics to be interested. Though I can’t say I’m entirely convinced just yet, I don’t want to be pessimistic around this announcement, as it’s a huge deal with great potential.
Frank Sagnier, CEO at Codemasters, said: “We look forward to engaging more deeply with our loyal and passionate community, and to bring new fans to both our game and the sport itself.”
If done right, it’s certainly possible this could be a hit – especially if the F1 2017 game itself is fun to play and to watch.
Time will tell.