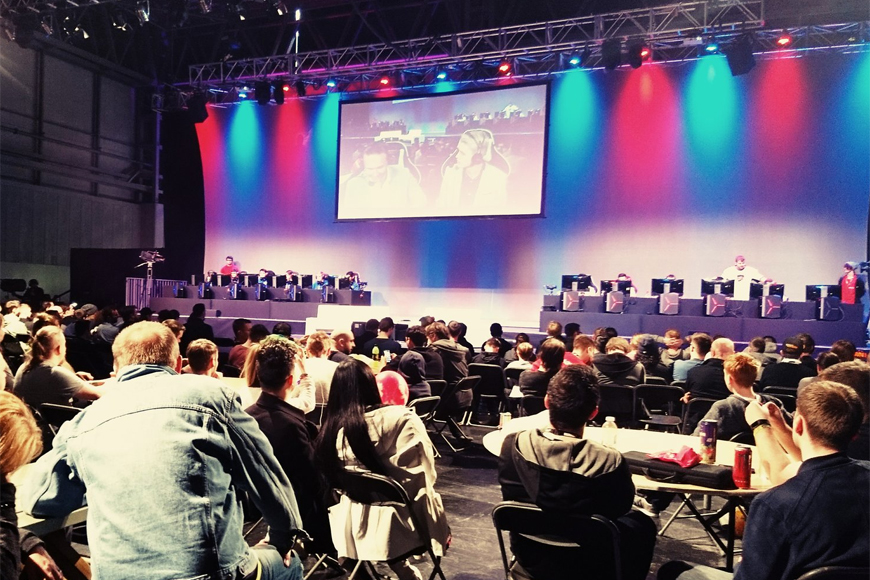 The UK League of Legends community has reacted to the decline in overall team quality following the Multiplay Insomnia60 LoL tournament this weekend.
Enclave Gaming beat Digital Warfare 3-1 to win the £750 top prize, with Digital winning £375.
Multiplay announced a lowered £1,500 i60 LoL prize pool back in February, rising to £2,250 if 16 teams signed up, or £3,000 if at least 32 teams participated.
Just 14 teams signed up in the end, keeping the prize pool at £1,500.
In comparison, the i60 Rocket League tournament had a healthier £10,000 prize pot. However, it’s worth bearing in mind that Multiplay supported UK LoL with a £20,000 UK Masters last year, and it announced a UK Masters LoL tournament is returning for summer 2017.
Obviously the lower prize pool at i60 meant a lot of the higher-tier teams didn’t bother taking part. In fact, there were just two orgs from the ESL Premiership: Enclave and xL (the latter was also a mix team of friends, not the usual xL line-up).
You can see the full list of participating teams and players here.
The other thing to consider is people moving on, this paves the way for newer teams and players to make their mark on the scene.
We rounded up some of the community’s opinions below:

Insomnia League of Legends quality team/player quality is the lowest its been in 4 years. Really sad to watch happen ;-;

This sparked a response from other people in the scene, starting with former player Brixton:

@BrixtonHam Oh no ofc and I agree, it’s fantastic that UK players are leaving for much better things but me personally Insomnia has always been iconic.

@CasterTridd @Jarge__ @Tundra_LoL Playing in the UK Scene is nothing more than a part time thing and the skill is lesser because of that.

@Tundra_LoL @MedicCasts @Toaster_LoL @TyrinLoL I find it a bit questionable that i60 Only has 750 quid for first place. ESL and stuff like UK Masters have STEPPED UP but Iseries…

@TyrinLoL @Tundra_LoL @Toaster_LoL @MedicCasts Beforehand you’d definitely atleast recognize a lot of the players from soloQ. Nowadays i barely knew anyone who played in the last ESL.

@Tundra_LoL @Toaster_LoL i don’t think UK scene been declining for “years” in LoL either. UK scene had an amazing 2016 imo

@Tundra_LoL @Toaster_LoL @MedicCasts I wouldn’t say the skill quality in terms of the cream of uk crop has gone down, there is just much less of it now definitely

@Tundra_LoL @Toaster_LoL @TyrinLoL Also a lot of better UK talent is going to other national leagues. Look at LVP.

some fantastic teams at i60, glad to see the competition is still so high

Insomnia’s Overwatch tournament manager hinted at more opportunities for up and coming players:

Here’s some more comment from people in the scene we reached out to:

“I agree that not a lot of teams on our level – ESL level – came [to i60]. But we came to enjoy Insomnia and see how far we have improved since i59.
“As I’ve said on Twitter, we can only beat the teams in front of us and that’s what we did. I doubt that people thought we’d have no chance if other teams came, because if anyone watched ESL this season, they’d know that [Enclave] Dawn can go on par with the very best of the scene.
“Either way, it was a fantastic LAN for us and I couldn’t be happier for Dawn. I’ve received a lot of congratulations from people in the scene and that’s once again refilled my level of passion for UK esports. I hope everyone else also had a fantastic time.”

“The level of gameplay and skill in UK LoL has truly downgraded, based on what I saw earlier for the UK LoL finals.
“However, despite this I’m pleased in a way as these lower ranked players will not have the same attitude of the previous high-ranked players with the ‘I deserve Challenger’ mentality and self entitlement.
“It’s actually good to see this as it welcomes lower ranked teams. Viewers may feel more motivated thinking: ‘I can beat these teams’.
“UK LoL isn’t declining nor is it growing, but it looks like it’s been left in the same place for a while. Hopefully the departure of certain players in the scene will allow the scene to grow. I see it as a rebirth of UK LoL. Maybe there’s a cycle and we are at the start of it again.”

“At the moment MnM are by far the best team in the UK. They didn’t show up due to prize pool.
“I assume this was the case for many of the teams but i also think that the ‘off-season’ of ESL Prem meant that many teams are reforming, and therefore wouldn’t have a solid, well-practiced roster.
“These two things combined are why the tournament had less talent in it than usual.”