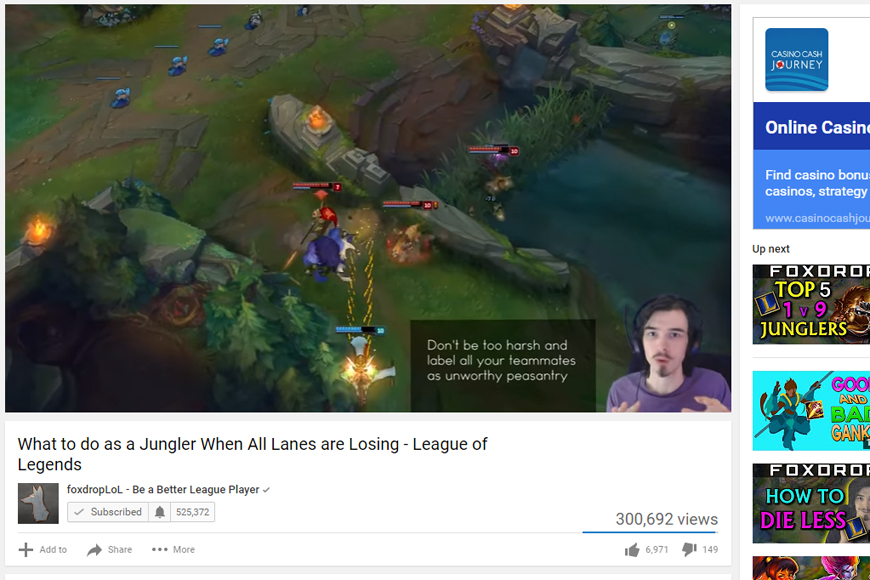 UK League of Legends YouTuber and streamer Dan “Foxdrop” Wyatt has spoken about the community’s general perception of content creators, following recent controversies.
Headlines in recent months include the CSGO Lotto controversy, Phantoml0rd ban and BiblicalReaper money begging.
Speaking to eSports News UK in an interview (to be published on the ENUK YouTube channel later this week), Foxdrop commented on what viewers think of streamers, specifically around sponsorships and partner deals.
“I feel like the community has a view that if a content creator is doing something to make money, like a sponsorship, it’s immediately bad,” Foxdrop said.
“And I don’t think that’s fair. It doesn’t mean someone is evil or want to milk viewers for money because they have a sponsorship.
“Just watch TV. The Premier League was known as Barclays Premier League for ages – that’s a sponsor right there. It’s in your face. And it’s obviously a huge league. I don’t think people realise how bombarded they are by sponsorships in everyday life, and how normal it is.
“But if you are dishonest, that’s bad. You should never mislead your audience. So if I endorse a product, you could say I’m maybe misleading my audience there because I might not like the product. But I only take on sponsorships where I do think it’s a good product. It’s not in my best interests to sell out for something that is total w*nk.”
Foxdrop mentioned the controversy surrounding WTFast as an example, said the CSGO Lotto situation was pretty bad, and that all of these things have changed the public’s perception of streamers.
“I think it’s dangerous to group things and immediately think streamers are making money – I hate this,” he added. “This is not as black and white as it’s portraying itself to be. But people are quite unforgiving in that sense.”

“I feel like the community has a view that if a content creator is doing something to make money, like a sponsorship, it’s immediately bad. And I don’t think that’s fair. It doesn’t mean someone is evil or want to milk viewers for money because they have a sponsorship.”

Does Foxdrop think the streaming sector should be regulated somehow, beyond the usual Twitch terms and service agreement, like it is in China?
“To an extent it’s already kind of happening with terms and service and stuff, but I honestly don’t know if it needs to be regulated,” Foxdrop said. “If China’s doing it, it’s not necessarily an example the West should be adopting. China is a very different society… I don’t think it should necessarily be regulated, but if people do dumb stuff, they should be punished.
“The audience should try and compare YouTube sponsorships to real life adverts on TV, and see what the similarities are. In CSGO tournaments, they have advertisers including an eSports app, I doubt everyone endorsing that think it’s an amazing app, but that’s how you sell a product.
“Gillette is probably not the best a man can get, but it’s how you sell a product.
“Streamers should be transparent and shouldn’t mislead, but there’s always going to be a slight exaggeration when you sell something.”
On having a brother (Phylol) who is also a full-time content creator, Foxdrop commented: “Overall it’s good, we get on perfectly fine, we’re good friends actually, it’s nice to talk to someone [about content creation]. We have good chemistry and have fun together.
“There’s always going to be competition between brothers, that’s just how it is, but we’re not that competitive. He’s probably more competitive because he’s the bigger brother. Honestly he’s blowing me out of the water right now, he’s doing YouTube properly and is working bloody hard. He’s got crazy views – there’s no competition anymore really.”
Foxdrop also spoke about the UK League of Legends scene, how he got his educational/entertaining streaming style, his best jungle picks and his thoughts on the current meta.
He also chatted about real life foxes, cups of tea and that one time he got kissed by a drunk UK eSports mid-laner at Worlds…
Check out the full interview with Foxdrop this week on eSports News UK’s YouTube channel
Follow Foxdrop on Twitter, YouTube and Twitch here