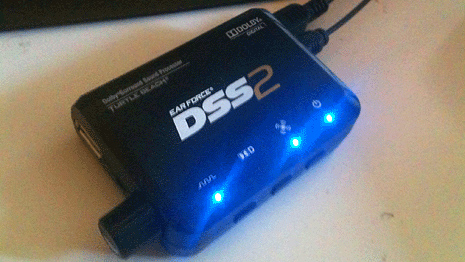 The DSS2 is an intelligent bit of kit that lets you add Dolby Surround Sound to your standard stereo headset for some truly mind-blowing results.
We review the DSS2 after testing it out extensively for the past few months – and show you how to make your Xbox 360, PS3 and PC games sound as incredible as possible.

Product: Turtle Beach Ear Force DSS2 sound processor
Platform: Xbox 360, PS3, PC
Producer: Turtle Beach
Release Date: Out now
Price: Around £60
Reviewer: Dom Sacco
When we first unpacked the DSS2, we were a little sceptical. How can a unit so small claim to improve the sound quality of your headset so much? Can surround sound really work when it’s limited to one headset or a pair of standard headphones? And why would you want to use it when playing a video game?
Well you’ll be happy to hear the answers to our questions are yes, hell yes, and read on to find out.
Once you’re all set up on Xbox 360, PS3 or PC (we’ve explained how to do so at the bottom of this article), the DSS2 is surprisingly simply to use. You have a volume switch, which can be clicked in to instantly mute the in-game sound, and three central buttons at the front of the unit.
The right-hand switch turns surround sound on and off, the middle button cycles through one of six surround sound presets, while the left button lets you select from nine different equalizer settings. These are as follows:
Surround Sound Angles

Now after testing out the processor using our Turtle Beach PX21 headset, we grew to love equalizer presets 2 and 3, which really add some oomph to the headset’s bass. We were also a fan of Surround Sound Angle No.3, which we found to be the best for all-round surround sound.
One of our gripes about the DSS2 is there’s no way of knowing which preset you have selected, other than to read through the list in the manual and use a bit of guesswork. The thing is, sounds really differ between games, so you might want to tinker with your settings depending on what you’re playing. But it’s easy to lose track of which preset you have selected, which can get frustrating.

Saying that, it’s easy to forgive the DSS2 of this minor shortcoming. Why?
Because it makes games sound fucking awesome.
Surrounding your senses
We tested out a wide range of titles and genres using the DSS2 and have to say it’s most beneficial to players of first-person shooters like Call of Duty and Battlefield. The surround sound really does add another dimension to gameplay. You can hear other players’ footsteps, explosions and gunfire in a 360-degree angle, so you know exactly where your next enemy is coming from.
Likewise, in Skyrim, not only can you hear the crackle of fires, footsteps and guards talking as you walk past in full surround sound, but you can really hear the wind, rain and other atmospheric noises even more vibrantly then before. Notch an arrow and it’ll feel like you’re holding the bow in front of you – get clubbed round the back of the head and it will really feel like the blow has come from behind you.
The same goes for other shooters and tense action titles like BioShock and Alan Wake. For titles where you control characters from a distance, such as FIFA 12 and Diablo III, the DSS2 isn’t quite as useful as it is in first-person and in-your-face games. The surround sound, while nice to have, is almost rendered redundant. And remember, if you already have a surround sound headset, the DSS2 isn’t required. It’s for those of us with standard headsets.
Sometimes deeper bass levels in certain games can drown out the trebles, so things like voices and minor sound effects can be pretty quiet at times. Tinker with the DSS2’s settings every time you switch games to get best possible noise for you.
And very occasionally the surround sound doesn’t feel fully 360-degrees. For example, if you’re moving around something which lets off a noise, like a fire, as you reach a 180-degree or 360-degree point, the sound of said fire feels like it suddenly clicks ahead of you or behind you. It isn’t quite as smooth as it could be. But again, don’t let this minor, rare niggle put you off – the DSS2 is well worth owning.
It’s easy to set up and use, it doesn’t take up much space, and you’re getting a lot of sound for your pound. The fact that it can be used on PS3, Xbox 360 and PC is also a great selling point.
Don’t forget you can also watch films using the DSS2 – we recommend using it to watch a film on the PS3, or a even a standard DVD or Blu-ray player, for a truly astounding movie experience. While games are sounding better as time goes on, the majority of films still have exceptional, superior audio quality.
It may have taken us a few weeks to adapt to the DSS2, but now we know it inside out, we can’t imagine ever playing a game with a standard headset again.
Verdict
This is a recommended purchase for any gamer who regularly uses a standard headset. Anyone who is serious about getting the upper hand in first-person shooters or wants to to experience the best possible sound quality would be mad not to give the DSS2 a look. If you have a decent headset already and are on a tight budget, it’s not completely essential, but for everyone else it’s a fantastic buy.
9/10
Pros: True surround sound, incredible value – especially if you own a cheap headset, great customisation options, compatibility with a wide range of headsets and consoles.
Cons: It’s difficult to know which equalizer you have selected, surround sound quality varies from game to game.
How to set up the DSS2
This video below explains how. Note that for older versions of the Xbox 360 you’ll need an HDMI audio adapter cable for optical audio output.

What do you think of the DSS2?

It is well worth getting it, Charlie, especially if you play competitive. The angle and equalizer presets are in the article above. You should be able to pick this up for cheaper now as well. Obviously there’s no point getting it if your headset already puts out Dolby Surround Sound.