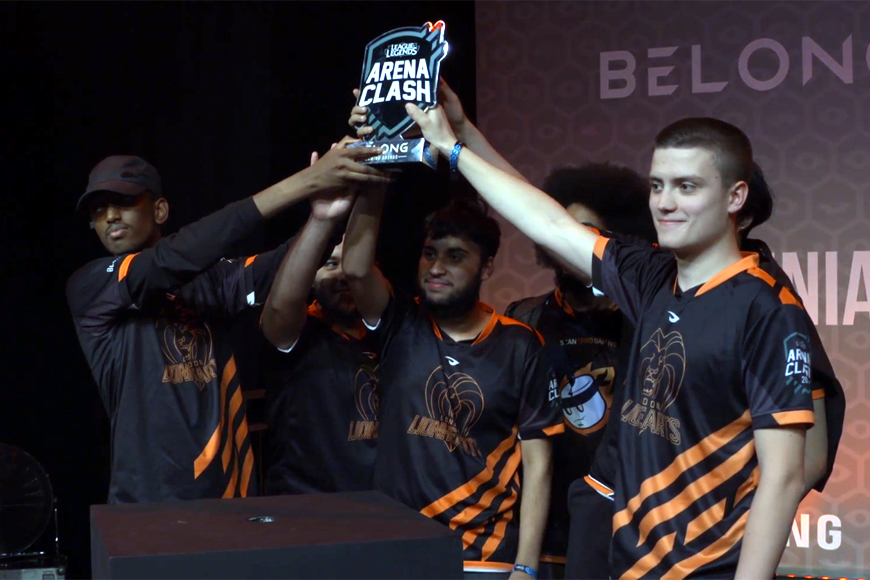 London Lionhearts beat the Teesside Steelers 3-1 in the League of Legends Arena Clash final at Insomnia65 on the weekend.
The six players – in UK esports organisation Lionscreed’s academy team – have now qualified for Riot UK’s official Forge of Champions tournament.
Arena Clash is a tournament organised by retailer GAME, which sees different Belong Arena teams facing off against one another, representing their respective store and area.

Lions Creed owner Abdiqani ‘True Rambo’ Ahmed told Esports News UK that the Lionhearts’ coach at the event, Adrian ‘Jamada’ Thorne, is with MnM Gaming but was allowed to continue to work with the academy team as interests doesn’t clash.
“We want to compete on all levels, especially at grassroot levels, in order to help players transition in the scene,” True Rambo said.
“We have around 20 players in our academy team which we help train and put forward towards tournaments. Some do move onto bigger teams in the scene or branch to other scenes whereas most actually want to stay with the lions and transition into the first team.
“We put a very big importance in scouting and improving the UK talents, and the Belong Arena Clash is such a good tool to help those players grow.”

YAAAAAAAS THEY DID IT! A decisive game to close out this @BelongArenas Bo5 series with a 3-1 victory! #GGWP to @BelongTeesside for the great series of games! @IGFestUK

The finals were cast by Cyn and GreyHart, with Munchables working as stage host.
Teesside Steelers told Munchables after the final: “Even though we lost, we had a great time here. I felt like we’ve really grown as a team and we’ve been competing really well as a team. It’s unfortunate we didn’t manage to do as well today, but it happens and we’re okay with it.”
They brought a mascot with them for the final too – Toothless from How to Train Your Dragon.
London Lionhearts added: “We played well as a unit and got the win, but got it in a fashion that makes it feel ten times better. Everyone smurfed, everyone played well and did what they needed to do, it was a bit of a free… well not free, but it was a good series.”

The Steelers won some headsets and other goodies.
You can check out the full final on Twitch here.
In the separate League of Legends BYOC tournament at Insomnia65, Nox emerged victorious after beating Bulldog 3-0 in the final.