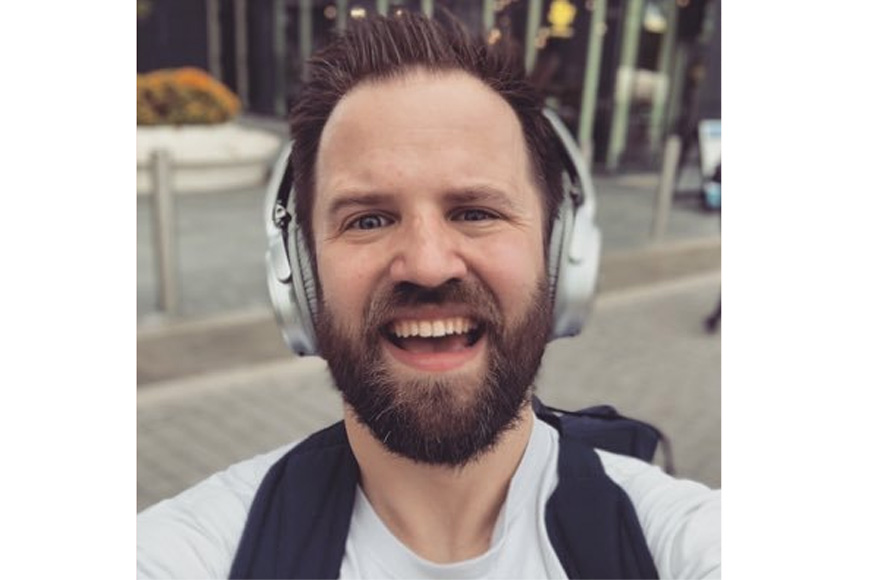 Popular YouTube and Twitch channel The Yogscast is embroiled in a harassment scandal involving one of its content creators and its CEO, with a third member under investigation.
Mark ‘Turps’ Turpin (pictured) stepped down as Yogscast CEO today following accusations of inappropriate behaviour including apparent sexual harassment and abusing a position of responsibility.
Turps said in this Reddit post: “Just to let you know I’ve stepped down as CEO of the Yogscast. When I recently said we expected the highest levels of professionalism from our talent, I need to be held to those standards too.

“I have sent some inappropriate messages to several members of our community and I’m deeply embarrassed about this error of judgement. There’s no justification or excuse for my behaviour. I was in a position of considerable responsibility and you all deserved better from me. If you’ve been upset by my actions, I’m very sorry.”

“There’s no justification or excuse for my behaviour. If you’ve been upset by my actions, I’m very sorry.”
Mark ‘Turps’ Turpin

The news comes after Yogscast content creator Matthew ‘CaffCast’ Meredith was let go from the group over allegations regarding ‘the sexual exploitation of fans and moderators of his Discord server’, Dot Esports reported earlier this month.
The YouTuber apparently asked to hire female mods, and told existing mods to hide his relationship status from fans, so that he could allegedly have a greater chance of entering into sexual relationships with them.
Lewis Brindley, a founding member of the Yogscast, recently asked people to let him know if they had any negative experiences with Yogscast staff.
He has confirmed a third member of the Yogscast – Sjin – is under investigation.
He has now posted an update on Reddit, saying: “It’s been an eye opening week for me – we owe everything to our community so it’s important we deal with bad stuff like this responsibly. I’ve seen actual evidence that looks fake, and fake evidence that looks truthful – so we needed time to look into all of this.

“Following your emails – we’re looking into some historical claims against Sjin and I’ve asked him to step away from main channel streams in the meantime. As I’ve said before, we are trying to do the right thing and take these claims seriously and would rather everybody didn’t jump to conclusions.”

Another British streamer, Methodjosh, faced similar accusations earlier this year (covered in this report by Kotaku here) and has since been banned on Twitch, without publicly explaining why.

Scottish Valorant player Avexic released by esports organisation Skelp after being accused of sexual...
'A great day for the women of Riot Games and women at all game and tech companies' - Riot settles ge...
Method, Wolves and a trio of other organisations join UK Esports Team Committee, bringing the total ...
Dom Sacco

After their stint with notch way back when, something was always wrong with them.
I’m surprised people didn’t investigate them sooner. Income must be hemorrhaging.

They’re investigating themselves, just an FYI. Your statement about being surprised nobody had investigated them sooner led me to believe you were misinformed

They’re not investigating themselves, Lewis has hired a third party HR company

I’m confused…
If Yogscast commission an HR company to investigate themselves then K is technically correct. They are investigating themselves, albeit through a third party to ensure impartiality.

The “incident with Notch” was that Notch slandered them on Twitter. Given Notch now posts white supremacist tweets I think you need to take a very long and hard look at yourself in the damn mirror.

How are his political views relevant to any of this?

Just someone on the internet

This article is slightly wrong.
“The YouTuber apparently asked to hire female mods, and told existing mods to hide his relationship status from fans, so that he could allegedly have a greater chance of entering into sexual relationships with them.”
This part was never mentioned in the post from Turps. So don’t try and post him in a negative light that quote above is what Caff did. Give me strength, if you are going to outs someone make sure you get the facts right in the first place

Hi,
This part is about Matthew ‘CaffCast’ Meredith and as indicated in the paragraph above it, is based on what Dot Esports reported on the situation earlier this month, hence the use of ‘apparently’ and ‘allegedly’. That part of the article is based on reports, not concrete fact.
Dom

Belvie
Reply to  Just someone on the internet

No it wasn’t mentioned by Turps…IT WAS HOWEVER MENTIONED BY HIS OWN STAFF. You know the people who were asked to hire female mods and were told to hide his relationship. https://www.reddit.com/r/Yogscast/comments/c9fkhp/seems_like_caff_did_other_things_than_just_asmr/esyb6e5/?utm_source=share&utm_medium=ios_app
Maybe don’t try and post the site in a negative light. Give me strength, if you’re going to out someone make sure you have the facts right. Your words, not mine.

This is Yogscast’s Metoo-moment. I think Lewis has handled it well so far. I also think they should’ve tried to prevent this sort of creepy culture from manifesting, with company policies and training much earlier though. Right policies might’ve saved Turps and Caff from ever acting so awfully.

not your dad
Reply to  Yogfan

This Yogscast’s Metoo-moment. I think Lewis has handled it well. I also think that they should’ve tried to prevent such creepy culture from manifesting much earlier, with company policies and training. Such policies might’ve saved Turps and Caff from ever acting so awfully.

Sad that turps is leaving

Pretty happy about this tbh. Never liked turps because of his annoying persona, if it means he’ll never show up again, hoorah!

dont be a dick

I thought I was the only one that disliked him, I completely agree with you. He was there with Simon, Lewis and Hannah from the start but ever since he performed live, I found him to be completely pretentious and not funny at all. Good riddance.

Is this why Turps and Sjin haven’t been in any videos lately? If so, it’s a bit saddening but I’m extremely happy that they’re doing something about this.

At least they’ve learned to get external help. The previous four “scandals” they did nothing, said nothing and that rubbed the majority of the fans the wrong way.
From a PR standpoint, this has actually been handled pretty well.
As usual, I’m gonna wait a few months and see what concrete facts are dug up before I comment on the actual events.

What previous incidents are you referring to?

Everyone (Yognau(gh)ts included) needs to take a step back and look at this with an objective view point. No matter how long you’ve been a fan or what members of the Yogscast have done in the past this is a serious issue with serious repercussions. Ive always been a fan of YC no matter what accusations have been thrown around but if members are choosing their own mods then that means they will have the ability to manipulate or even coerce people in the servers. I believe a good way to prevent such things happening would be third-party non biased… Read more »

The reference to Sjin in lewis’ response, was likely a reference to a re-investigation of sjin asking for nudes of an 18 year old girl a good 4 or more years back, when both of them had partners at the time. Though the girl didn”t supply any screenshots or evidence, so nothing happened. Lewis is likely having it investigated just to make sure it was nothing

More like 6-7 years ago. It was brought up a second time about 3-4 years ago.