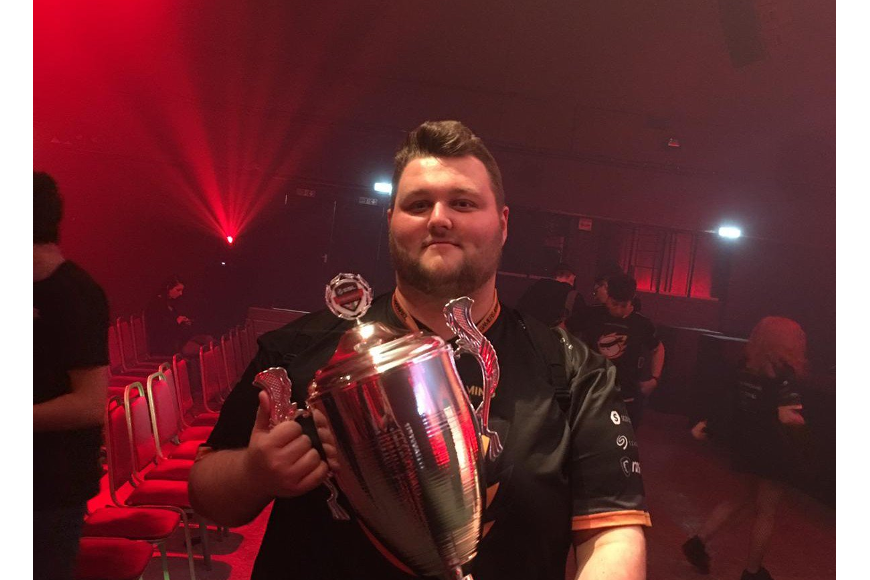 During the Rainbow Six Siege ESL UK & Ireland Premiership finals in Manchester, ENUK’s Craig Robinson had a chat with UK player Kendrew from MnM Gaming, after his team’s semi-final victory against Vexed Gaming.
Of course, MnM went on to win the finals versus Team Secret.
We ask Kendrew about the finals, the state of the meta and MnM’s progress.

ENUK’s Craig Robinson: You’re fresh out of beating Vexed in your series and I noticed it was pretty close until sides had switched and your team started popping off a bit more. What was it like in that game?

Kendrew, MnM Gaming: It was a bit hectic. We haven’t been able to practice this week coming into it because it was my birthday over the weekend and I was getting a bit too drunk. But, we knew we had the ability to beat them; they are a mixed team. I think without Pengu they are a bit (Kendrew wobbles his hands) and that shows by their results.
They are all great players, but we knew if we played our game and played round by round we would win pretty convincingly, which happened.

Did you think you would play Vexed in the semi-final? At the start of the season, they didn’t do too well, but they shot up, whereas Epsilon fell down. Who were you expecting to face?

I thought we were going to play Wind and Rain, to be honest. But then everything happened the way it did and we played Vexed. I was expecting to play Wind and Rain because they are showing by playing Team Secret right now, they are actually giving them a close game. I didn’t think anyone else like Epsilon had the ability to really contest with a structured team. So, I was expecting WaR.

Are you surprised by Wind and Rain as a team? Last season they were at the bottom and now they are at LAN.

I would say no and yes because I played with Guidance Gaming, which is the same team as last season. I know they are all good players, they just lacked a bit of chemistry and teamwork and playing together.
Bringing in Speeds was probably a good idea, because he is very vocal as I’ve seen playing Go4s with him. And Tyrant – I speak to him on TeamSpeak every single day and he is absolutely nuts. If you put him on Ash, he will kill everything. So, it doesn’t really surprise me they are here at all.

Do you have a favourite for the series going on between Wind and Rain and Team Secret?

I want to play Wind and Rain because I am friends with them, and it will be a bit of a slugfest because I played with them last season. But I think without taking anything away from Wind and Rain it will be Secret. I think it will be MnM vs Team Secret in the final which I think everyone is expecting.

Presuming it’s you and Secret in the final, how do you think that series will go?

We have only ever played them in best of ones, so, if we ban out some maps they are not expecting, I think it will be close. I think we could beat them 100% as it’s not their full line-up. We have scrimmed them a couple of times over the last couple of weeks because with them practising for Pro League and us for Challenger League.
It was close and I definitely think whoever turns up on the day are going to end up winning. I think judging by our last performance, if people are playing as well as some people did like Doki was popping off on Coastline. I think we know we are on a similar level to them and we are obviously underdogs, but we can win. I’m pretty sure it will go three maps regardless of who wins.

Regarding this new-found confidence in your team, MnM as a team has evolved so much over the last three months. You yourself as joined the MnM RB6 team, you got into the Challenger League and have this new vibe going on. What happened to help make MnM as big as it is right now?

From what Doki has told me, as I have obviously only just joined what was originally the old line-up, there was some sort of leading roles issue. Some people in the team were not getting along properly. But they brought me in as I am vocal in game. Even if I was dropping 1 and 9 (kills to deaths) I’d still be vocal.
Technically, I am the IGL (in-game leader) but everyone talks so I don’t want to claim it’s all me. Bringing on Saves is a good move as well. Most players on Ash are not vocal, they just run in and kill people and that’s their job. But Saves… I was on Pact with him in the Challenger League last season and went to Dreamhack Winter. He is really vocal and always gives ideas which makes it easy to IGL.
I don’t want to say it’s me and Saves coming on is why we got into Challenger League, because the vibe of the team is going well. I think having this leadership role where everyone can shot call is easy and makes everyone’s life easier.

As you said, everyone on the team is vocal and contributes in a democratic-like system. But when it comes down to those high-pressure moments, who on MnM steps up and becomes the authoritarian ruler in that moment of time?

I’d say it depends. There isn’t this one singular person. Like CTZN is very vocal in these situations, it sometimes causes a bit of drama because he thinks he knows what the right play is. Obviously, he has a lot of game sense and he feeds off the information and cameras. So, he is very vocal in these situations. He is constantly ‘let me talk, we can do this’ and is normally the guy who is clutching so I think it’s CTZN.

Regarding Doki as a player, he was the wildcard for Vexed last season. With him being on MnM and playing against his former team, what was the battle between you two like, now things have changed so much?

With everything going on with us now being in Challenger League, we have this confidence despite having a poor week. I think we are just better players, as egotistical as that sounds.
Obviously, Doki is very vocal on this. He’s like, ‘we can’t lose to Vexed, I won’t let it happen blah blah because of last season’. In today’s game against Vexed, he was like. ‘let me play Ash repeatedly because Saves wasn’t fragging’. I think in his head he wanted to prove he can play even though there’s rivalry or there is a spotlight on him because of his past.

Regarding Siege as a game and its current meta, do you believe it is a strength for your team?

I definitely think so. One of the reasons why we are performing decently at the moment is because the last 2 seasons had a 3-month grace period for operators. Nomad and Kaid have just come into play so it is much more of a fragging meta. You see much more run outs, spawn peaks, much more high-risk high-reward plays that sometimes work or sometimes don’t. I’d say everyone on the team can frag convincingly.
I know NeLo can pop off and he is a hardcore support player and he is going to sit on site and not overpeak. He’s just going to wait and play his utility because he is always Smoke. We have 4 capable fraggers and that’s why we are pretty strong at the moment.

What is the impact this meta has had on the competition in the Challenger League? Are teams slumping because of the meta or is generating a lot of heat?

I’d say Vitality is the only exception as they have had their own unique strategy. They play ridiculous setups, throw enemies off and take their time. If you look at GoSkilla, the Finnish team, Stigi and pannari are playing out of their mind, as in dropping 12 kills a game.
Obviously, it helps when someone is capable of popping off like on our team with CTZN or Doki at any time. For example, EnD Gaming just came out of losing 4 games in a row to win 2 and draw against Vitality. Panix and Sloppy are really hard carrying and that shows the way the meta is. If you can get one or two people who are gunning, then the match is yours to lose.

Do you reckon you have a strong chance at qualifying for the Pro League this season?

I definitely think so. Us and Vitality – no discredit to any other team. Everyone browsing Reddit seems to think it’s us and Vitality. I think we are better than Vitality. The game we lost vs them was ours to lose as we lost a 1v2 or 1v3.
After that game, we said we strongly need to work on our executes and learning to chill. We have a bad habit with not being able to take our time. People saw it in our game earlier. Doki jumped through a window full sprinting everywhere. If he isn’t going to hit someone and kill 3 or 4 people, then we lose the life and are playing at a disadvantage.  We need to learn more on post plant stuff but yeah that’s all I can really say.

Regarding Siege’s current esports drama, the one-shot headshot through surfaces is a point of contention in the community. What is your take on this?

I think the thing that makes siege such a unique game is the one-shot headshot mechanic. However, I don’t really have an opinion on it really. If they changed it, I wouldn’t care and if they kept it in, I wouldn’t care. Although, the amount of times we lose rounds in Challenger League because they get an opening pick from opening a window on someone who is still setting up through a wall happens quite a lot.
So, I wouldn’t complain if it happened, but I don’t see it happening because it’s a selling point of the game.

On a final note, is there an operator you think would spice the game up or to fill a role that doesn’t exist in the game right now?

I always thought the idea of having someone that can reinforce destructible parts of the floor, similarly, to reinforcing a hatch.

Do you mean like reinforcing a spot where people breach charge floors?

Yes exactly. Or a spot where Buck can skeleton key the floor above. So that way people can sit on spots using a different type of reinforcement and staying on it. Or you can get someone that can reinforce half a wall, part of the floor. I think Mira changed up the meta to a point it was balanced. No one complained about Mira once when she came out as it changed the way that people played the map and bombsites. For example, you can hold customs on Border.
I think if you could reinforce half a wall or part of a floor that the attackers want to come and take – that could spice up the meta a little bit. You will see a lot more strategic holds because of the different strats and the team with the better strat would win. Having someone being able to do this will make the game a lot more creative, like when Mira first came out.