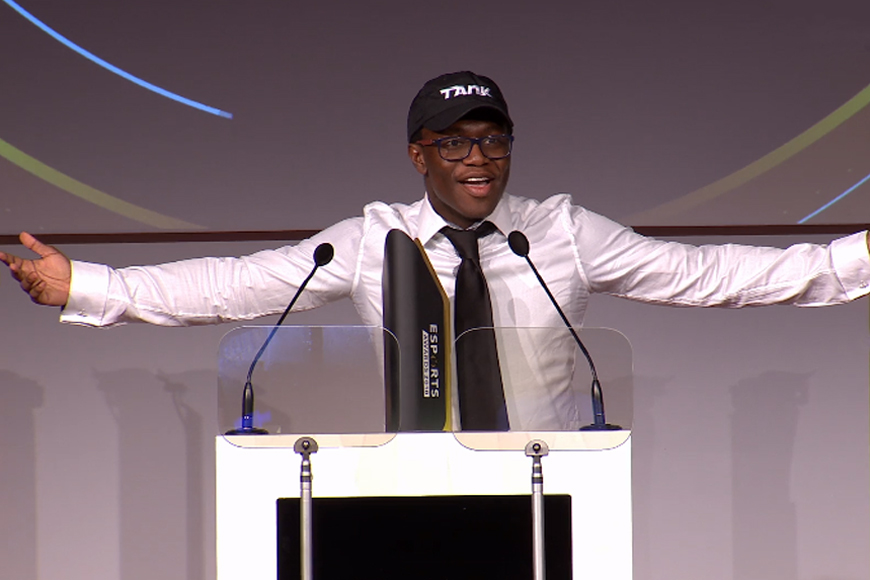 Popular British YouTuber Deji Olatunji (aka ComedyShortsGamer) angered members of the esports community after his antics at the Esports Awards 2018 yesterday evening.
Deji, who has almost 10m subscribers on YouTube and is the younger brother of KSI, announced the winner of the Publisher of the Year award.
He initially announced Epic Games as the winner, before back-tracking and saying the real winner was Blizzard Entertainment. Deji said he was ‘joking’ as the person from Epic Games was walking up to the stage.

Deji’s behaviour was criticised by some in the esports industry, including Paul Chaloner, who tweeted the following:

Man, I really pissed off the eSports community ???

Deji also took the time to have a pop at Twitch while he was on stage, sarcastically thanking them for allowing some Twitch users to illegally broadcast him and his brother’s boxing matches against Jake and Logan Paul earlier this year.
“Shoutout to Twitch for illegally streaming our fight,” he said. “You owe us money.”
At that point, someone in the audience proceeded to yell “f*ck off” at Deji.
Deji has made a name for himself over the years producing lighthearted videos, prank videos and gaming videos on YouTube.
Some expressed their disappointment around other areas of the awards, while others shared some more constructive criticism:

You couldn’t hear the sound at the back of the room, it was almost impossible, and then I think people just gave up and started chatting. You could only hear the guy in the ad breaks.

Spot on about this. It really feels halfway between an industry awards show and a community choice awards show. I think going either way is fine but the weird blend does a disservice to both. This years was a networking event with a secondary community stage.

Unfortunate most people aren’t paying attention to recognize the #esportsawards winners and their speeches, the hosts on the stage, or the presenters. Thank you to those that did.
Jacob and I cut our speeches short because of the crowd. There’s an after party for a reason 🙁

Esports Awards also showed the wrong person in one of the nominee reels:

There was also discussion in the Esports News UK Discord earlier today around the focus of the awards, and whether or not it placed too much emphasis on streamers over actual esports.
Some in the Twitch chat and others in the community also disputed the use of a fan vote, as those with the most fans are more likely to win.
Despite all this, the evening presented a good networking opportunity and it does help to put esports on the map and shout about the top talent in the scene.
Further reading: Esports Awards 2018: All the winners listed