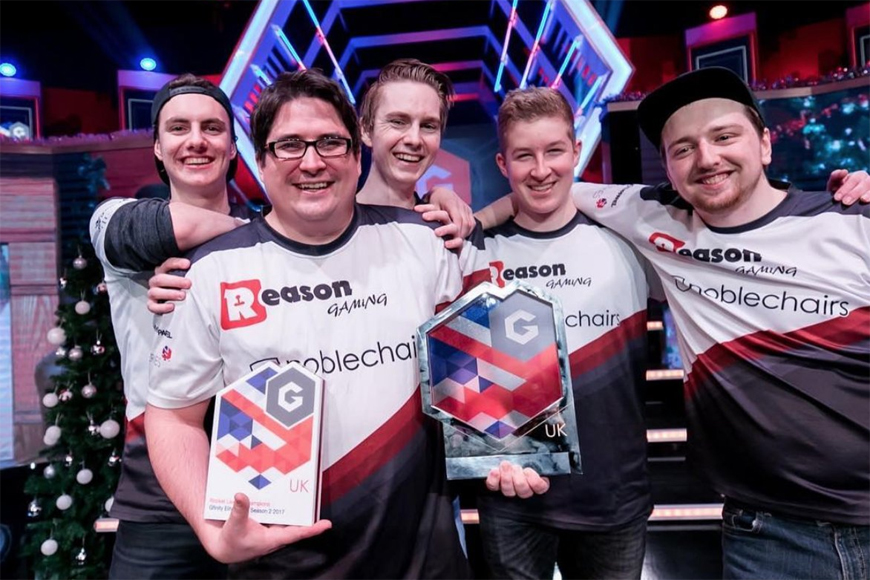 Gfinity has made a couple of announcements this week – one around its latest financial results and another regarding the return of Reason Gaming.

UK esports organisation Reason Gaming are back – and they will be taking part in Season 4 of the Gfinity Elite Series Delivered by Domino’s.
Reason left the Elite Series earlier this year as Season 2 Rocket League and franchise champions, along with other departing teams Prophecy, Infused and Endpoint.
These teams were replaced by the likes of Hashtag United, Ares, Nordavind and Unilad.
Ironically, Unilad, one of the teams that stepped in to take Reason’s place (to some criticism from the UK esports community) have now left the Elite Series after entering administration earlier this month, with Reason now taking their place.
Reason have entered into a partnership with Dream Team Gaming, a FIFA media brand owned by The Sun, who will take responsibility for Reason’s FIFA team. Its players include Akima “Fully” Byron, Anthony “Guigsey” McGuigan, Christopher ‘TheeBullock’ Bullock and Lee “ElTenTwelve” Smith.
The roster is completed with two loan signings from FUTWIZ – Nathan “Zelonius” Horton and Thomas “Tom” Leese – and will be managed by Talal Musa.

“With the season kicking off in just a few days, spirits are high in the Reason camp and I can’t wait to cheer our players on once again.”
Adam Heath, Reason Gaming

Talal said: “When Dream Team Gaming heard about the opportunity to partner with Reason, it was an absolute no brainer. These guys are determined to come back stronger than ever and make no mistake, they’ll be pulling no punches. Rest assured, by the end of the Elite Series, Reason will be firmly back on the map and DTG will be a serious competitor.”

Adam Heath, founder and team manager for Reason Gaming, commented: “It is great to be back for Season 4 of the Gfinity Elite Series. I am excited about reuniting with a mixture of our SFV players from Season 1 and 2, as well as welcoming all our new additions across all three gaming titles including our partners at Dream Team Gaming.

“With the season kicking off in just a few days, spirits are high in the Reason camp and I can’t wait to cheer our players on once again.”

Bryan Healy, head of global client services at Gfinity, added: “We’re delighted to have Reason Gaming returning to the Elite Series. Coupled with Manchester City joining forces with Epsilon Esports earlier in the year and the announcement of the ePremier League, this is big news for esports and highlights the growing convergence between real and digital sports.”

The Elite Series starts this Friday, October 26th at the Gfinity Esports Arena in London. It will be streamed live on Facebook. A press conference will take place on Wednesday October 24th. Gfinity said it expects to report revenues of £4.3m – a rise of 82% year-on-year – for its most recent financial year.
Despite the rise, attributed to managed services and two new clients in F1 and Facebook, Gfinity predicts to make a loss of £12.6m for the year before interest, taxes, depreciation and amortisation.
The company hopes to see break-even operating results within the next few years, as it expects revenue to increase on service fees and collaborations with publishers and distribution partners.
Gfinity also wants to raise £6m via another stock market share placing and subscription.
“The net proceeds of the proposed placing will strengthen the company’s financial position and support continued investment in its strategic priorities to generate future growth,” said Executive Chairman Garry Cook.
Executive chairman Garry Cook and COO Graham Wallace have subscribed for £100,000 and £25,000 in shares, respectively.
In addition, Gfinity said Charles Street International Holdings Ltd subscribed for 22.4 million shares, taking its stake in the company to 29.7%.
What does this mean for Gfinity’s future?
Over the past few years, Gfinity has been in start-up mode, investing money and generating more cash through the introduction of new shares. However, it has continued to make overall losses each year, despite rising revenues showing promise.
Now it’s estimating it will start to break even over the next few years.
Could this be a turning point for Gfinity from a financial point of view? Time will tell.