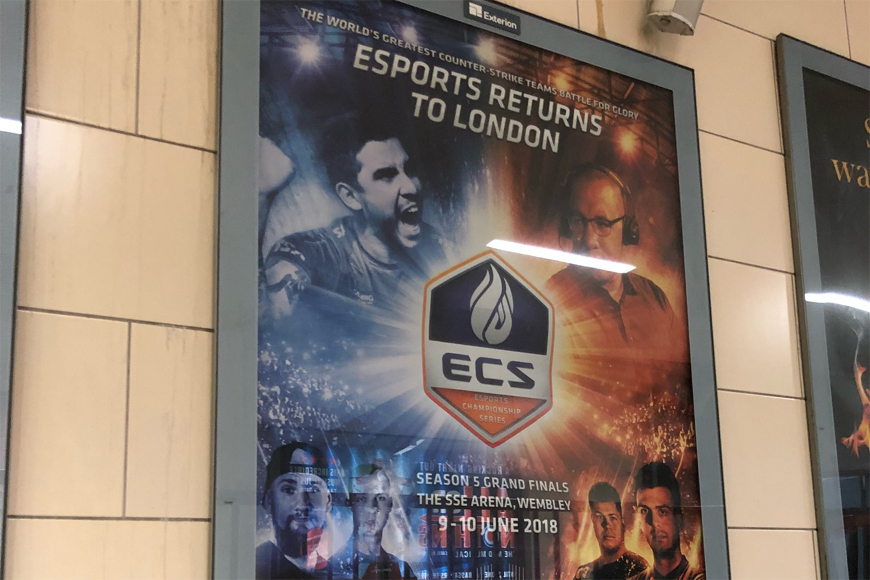 FaceIT has embarked on a major marketing drive promote the Esports Championship Series (ECS) CSGO tournament.
The idea behind the out-of-home campaign – which claims to be the biggest for an esports tournament in the UK – is to raise awareness for ECS and widen the reach beyond core fans.
ECS is the UK’s biggest annual CSGO tournament and will take place for the third year in a row at SSE Arena Wembley from June 8th to 10th.

Starting from today (May 17th) ECS will see adverts going up across London with roadside and retail screens along Shoreditch High St to the Fulham Road and Clapham Junction to Finchley Road.

“Traditionally esports marketing has focused on digital activations as this is where the community usually lives. We want to take a slightly different approach for ECS Season 5.”
Clement Murphy, FaceIT

Escalator and 4-sheet adverts are also going up at 65 London Underground stations along the Northern, District, Hammersmith and City lines and more.

To drive engagement with the campaign, FaceIT are also offering a pair of tickets to the first person who tweets a photo and the location to #ECSLondon from each location.

The campaign will be fully underway this Sunday, with escalator and 4-sheet advertising going up in 65 stations and additional roadside and retail screens going up from May 21st.

This is all over London now.
UK esports invasion begins soon with the @ecs finals ?

“Traditionally esports marketing has focused on digital activations as this is where the community usually lives,” said Clement Murphy, marketing manager for FaceIT Media.

“We want to take a slightly different approach for ECS Season 5, by broadening the reach and visibility of esports and CSGO competition. We want to bring all of the action and excitement of an ECS event to as wide of an audience as possible, and with esports never more in the public eye than right now, this is the perfect time to do that.”

Tickets for the ECS Season 5 Finals can be purchased here.