UPDATE (August 2019): Gross Gore has complained about Blizzard making him a troll-like creature in World of Warcraft, and has demanded his NPC be changed to a human king instead.

I’ve got a complaint to make against @Blizzard_Ent /@Warcraft

UPDATE (August 2018):
It’s official: Blizzard has put a Grozgore NPC in the full version of Battle for Azeroth.

WHAT THE ACTUAL FUCK, THEY ACTUALLY PUT IT IN THE GAME.

ORIGINAL ARTICLE (February 2018):
No(se), this isn’t the kind of headline we’d be expecting to write either.
Blizzard seem to have put British League of Legends streamer Ali “Gross Gore” Larsen in World of Warcraft (WoW).
Streamer Asmongold stumbled upon a troll-like NPC named ‘Grozgore’ while playing the alpha of Battle for Azeroth, the upcoming expansion to World of Warcraft.

Grozgore is standing in front of what looks like some kind of demonic altar, and is joined by two Tamed Boars.
The rare NPC mob displays as ‘Grozgore’ on the mini-map, but is listed as unknown when selected, though that’s probably just due to the expansion being in alpha at the moment. 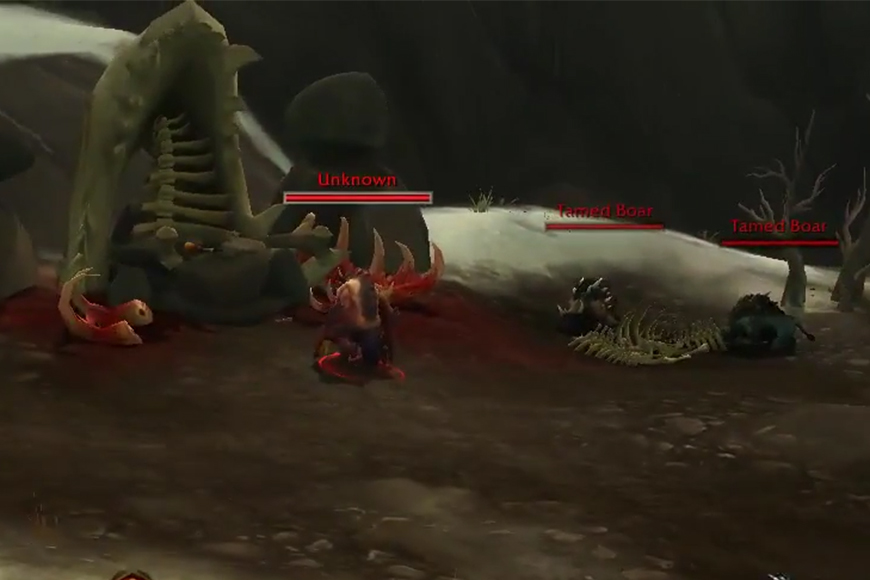 Gross Gore was memed for having a big nose a while back, but got a nose job a year and a half ago.
He tweeted:

THERES AN NPC IN WORLD OF WARCRAFT WITH MY NAME??
WHAT the fuck is going on lads.
WE made it bois, this is it, we made it big, fucking huge deal.https://t.co/8E3BuBCHcr
— Gross Gore (@GrossieGore) February 8, 2018

Blizzard has a history of putting gaming personalities and celebrities into World of Warcraft.
The late actor Robin Williams was placed into WoW back in 2014, in the form of the genie from Disney move Aladdin, whom Williams voiced.
Blizzard also added Ian Bates, aka the ‘red shirt guy’, into the game as an NPC known as ‘Wildhammer Fact Checker’.
Ian Bates became known for pointing out a factual inaccuracy within World of Warcraft lore at a Blizzard panel session at Blizzcon back in 2010, and videos of him asking the developer similar questions have received millions of views since.