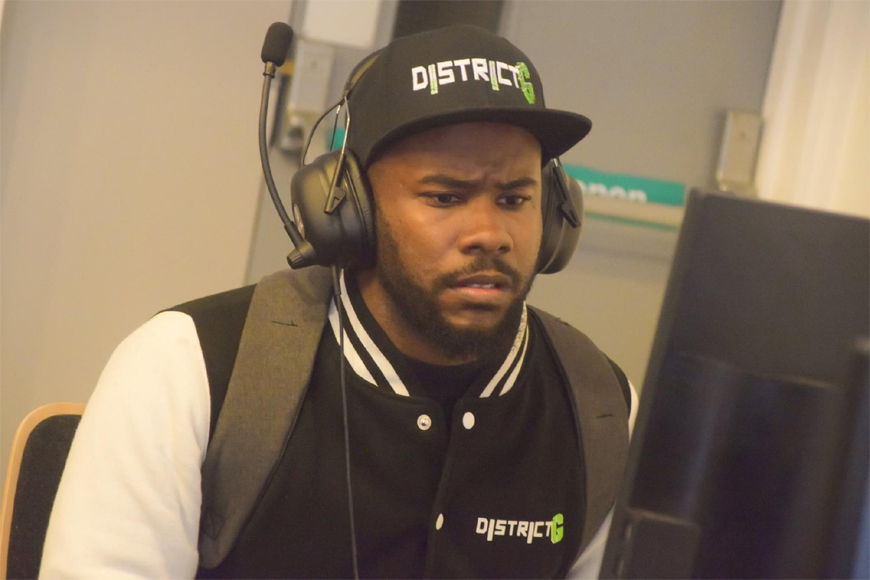 Two British Tekken players have hit back at critics after Bandai Namco took away their Tekken 7 UK Championship qualification spot for alleged collusion.
Justin “King Jae” Nelson has published a vlog to clear his name following claims he colluded with fellow District G teammate C-Krizzle.
This is one of the clips in question that purports to show the pair colluding at the Birmingham qualifier event on the weekend (C-Krizzle allegedly throwing the match to allow KingJae to progress).

This Reddit thread also appeared three days ago claiming the players were caught match-fixing.
Yesterday, Tekken 7 publisher Bandai Namco said in a statement: “Unfortunately, during the event two players have been suspected of collusion in order to manipulate the results of the tournament.
“Bandai Namco Entertainment does not condone such anti-competitive behaviour therefore we have come to the decision to revoke the qualification spots for District G | King Jae and District G | C-Krizzle. They will also not be allowed to take part in the London Qualifier taking place on Sunday May 14th.
“We will amend the rules to have a clear clause on collusion as a result of this event.”

“Bandai Namco Entertainment does not condone such anti-competitive behaviour therefore we have come to the decision to revoke the players’ qualification spots.”

Esports News UK has looked into the ruleset, and the only line around collusion is: “Any form of collusion will not be tolerated and will result in a disqualification.”
Some Facebook users have since reacted negatively towards Bandai Namco’s decision, saying that the company does not have any actual evidence of collusion. 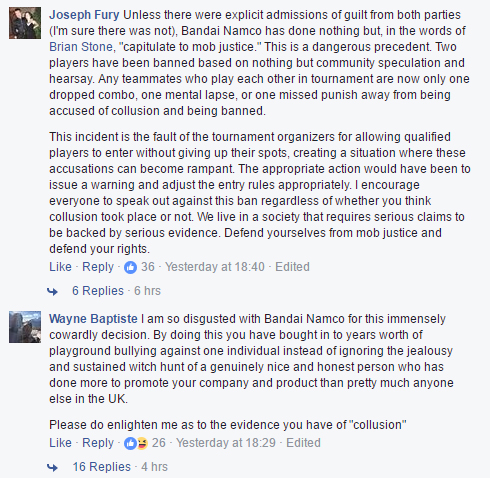 Qualification spots have now been given to the next highest placing players (RTFM | Asim and ED | K_Justice), who will play in the Tekken 7 UK Championship finals at MCM London Comic Con on May 26th.

What do the players have to say?

King Jae and C-Krizzle are protesting their innocence.
“At the end of the day, the truth is I don’t cheat, I do as much as I can to try and support the community and the scene,” King Jae said.
He claims a tournament operator asked him ‘not to throw’ during the tournament, and from his reaction in the vlog below, clearly felt insulted by this.
He also questioned why Bandai Namco took several days to make their decision, and why the ruleset isn’t clearer.
“The real thing you should look at is your ruleset and structure,” he said. “Why is it that people who’ve qualified are able to re-enter, play and knock out other people. There are players who have already qualified and got 1st twice – winning Birmingham and Scotland. What sense does that make?”

King Jae did say that he experienced lag at the tournament, and that another player he played against admitted this also.
King Jae went out to point out that he’s finished top three in plenty of tournaments, including a win at EGX’s Tekken tournament in 2016.

“To the people that hate on me, well done, you put peer pressure on Bandai Namco and made them revoke my spot. But what you didn’t do is stop me from going to the next tournaments and placing top eight again.”

On the ban, King Jae added: “This feels like it’s an attempt to try and damage my name. It puts a bad taste in my mouth. This is what I do for the scene, then this group CKT are coming in and guys talking rubbish.
“To the people that hate on me, fair enough, you lot should be popping that champagne. Well done, you put peer pressure on Bandai Namco and made them revoke my spot.
“But what you didn’t do is stop me from going to the next tournaments and placing top eight again. You lot won in the short term, but I’m still going to be playing in tournaments.”

I think I will avoid future Bandai Namco tournaments and tournaments with poor rulesets who then try ban players for their own mistakes.

Aside from the YouTube vlog, he made two Twitter vlogs here and here.
King Jae also said in a Facebook update: “You lot will never be able to keep me down.”
C-Krizzle told Compete: “Sure, I want my teammates to do well, but to just hand any of them a ‘free’ game is out of the question.
“I know there was less pressure on me since I had already qualified, but from what I can gather, there are a lot of people that that were just hating when KingJae got through… I’m surprised by the personal hate I’ve seen on social media, mainly targeted at KingJae.”

King Jae and C-Krizzle’s org – District G – said they were concerned about the personal and racial victimization they’ve seen following the incident.
Some Reddit users from the original thread reacted with jubilation.
One user known as smash_is_trash posted this thread titled ‘WE DID IT! CHEATING C*NTS BANNED!’
We’ve embedded other tweets and comments from the community on Twitter below:

We stand for competition. Prevention of it should be punished. There needn’t be a rule stating that players competing should compete. (1/2)

However, T7 is new to esports, we believe mistakes can be made and the players in question should be allowed to earn their spots back. (2/2)

My personal thoughts on the U.K. TEKKEN issue, not related to my work with BNE. I do not agree with the decision. In fact, I was shocked…