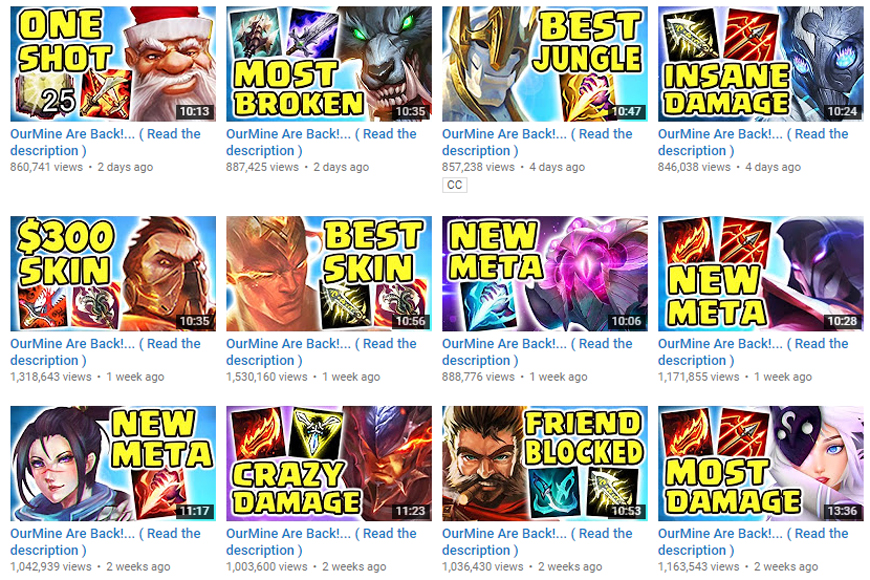 Several top gaming YouTubers have been hacked by a group known as OurMine.
UK League of Legends video producers Foxdrop and Kiandymundi have been hit by the hack, as have other big YouTubers including Nightblue3, LeafyIsHere and more.
Affected YouTubers have had all of their video titles changed to: “OurMine Are Back!… ( Read the description )”
Other top gaming YouTubers affected include Miniminter and h3h3productions.
While the YouTubers haven’t actually had their individual channels or accounts breached, the hack has instead targeted digital content network Omnia, which these YouTubers are a part of.

Aware of the change to all my titles/descriptions … Out of my hands, someone has hacked my network and got to me thru that

The site content manager at League of Legends information site Lolking says he has also been affected:

@Foxdroplol Happening to me as well 😐

The hack has been made by a group known as OurMine. They have also changed the video description of videos on the Omnia network to: “Hey, it’s OurMine don’t worry we are just testing your security, please contact us for more information.”
OurMine have also included a link to their email address and website, which leads to an ‘Account Suspended’ page.
OurMine have apparently previously hacked celebrity internet accounts to advertise their security services. The hack doesn’t appear to be malicious, but looks like it has been made to highlight security failings.
Omnia tweeted to reassure its users and says that no accounts have been seriously compromised.

For reference, no partner accounts have been compromised – updates shortly ^ AL

One YouTuber and streamer, Jericho, tweeted:

OurMine got into YouTube’s managing dashboard and changed some video titles. They are still a group of 12 year olds who wish they could hack

Kiandymundi saw the funny side of the situation:

Did anybody consider that because of these mass-youtube video hackings, the one positive is @Nightbloo ‘s vid titles are less ridiculous ???

Some have suggested the hack is an April Fools gag, but unlike our own hilarious April Fools post here, it makes no sense for a network company to do this to their clients.

Are Intel's new Alder Lake 12th gen processors good for esports? UK PC seller share their views
Making sense of the Twitch hack one week on: What effect will the leak have on viewers, streamers an...
Worlds 2021 song: Riot sneaked a meme into the 'Burn It All Down' music video for the LoL World Cham...
Dom Sacco