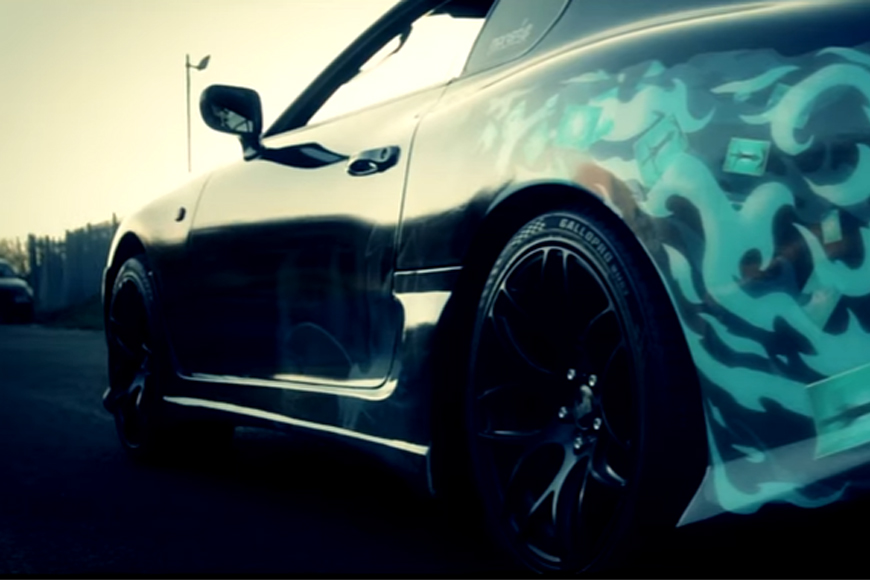 British League of Legends streamer Ali “Gross Gore” Larsen has shown off his own custom car for the first time.
It’s an untuned automatic 1994 twin JZ 3-litre 280-330bhp Toyota Supra imported from Japan, with gloss black bodywork and just 25,000 miles on the clock.
League of Legends character Twisted Fate – whom Ali is known for playing – adorns the side of the car and is seen throwing his trademark cards towards the rear.
There’s a Gross Gore ‘Phoenix’ logo on the bonnet and the rear bumper, next to a ‘Property of the Gross Gore army’ logo, implying the car has been built for the community and Ali’s fans.
Ali has spent months working on the car, since first revealing it in an exclusive Gross Gore interview with Esports News UK.
Ali said: “Eight months ago my life changed and I wanted to take my mind off things so I learned how to drive.
“I searched for the perfect condition Toyota Supra every day for six months and found this – I called instantly.
“I decided to not stream or make videos the past 1-2 months to focus on doing up this car, and now he is finally finished.
“The character is known as Twisted Fate – a champion in the world’s biggest MOBA, League of Legends. I only play this character in the game and got a reputation for just playing him, thus I decided to put him on my car to say thank you, because it felt right and I idolize the way he is, even if he is a made up character in a game.

“Eight months ago, my life changed and I wanted to take my mind off things so I learned how to drive. I only play Twisted Fate in game so I decided to put him on my car to say thank you.”

“The hood of the car is my copywright logo – the phoenix – which represents me as a whole. On the internet I have fallen many times, but always come back stronger, thus a phoenix matches my online presence best.”
Gross Gore plans to take the car to UK gaming events in the future, if his Riot Games ban is lifted by the end of League of Legends’ 2017 summer split.
Now that he’s finished the car, he says his next plan is to “become very ripped (workout daily), stream all the time and stay out of bad drama”.
Finally, why did Ali opt for an auto?
“Now we can have a huge debate, but I’ll just say the following. I live in the UK and roads are always congested,” he said.
“Having a manual can be tiring and annoying sometimes, especially when you just want to relax drive.”
So there you have it. He got an automatic because he can’t be arsed to move the bloody gear stick!
Stay safe on the roads, Mr Gore.
You can check out the full Gross Gore car reveal video below: