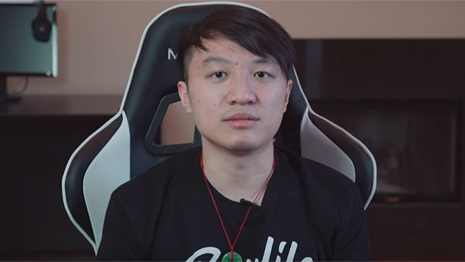 One of the UK’s top League of Legends eSports players – Raymond “KaSing” Tsang – has joined TSM as the team’s new support player.
It seems the former H2k player is on a trial run there, and will decide whether to stay with TSM after playing as support in the Intel Extreme Masters tournament next weekend. KaSing will be teaming up with Yiliang “Doublelift” Peng, one of the most well-known ADCs in the world.

In TSM’s announcement video below, KaSing said he was surprised to be “poached” by TSM, as he heard that TSM were on the lookout for a Korean jungler, support or top-laner.
Instead, he was planning on joining an EU team, but is now happy to be with TSM.
“I feel like they’ve tried really hard with their infrastructure, and behind the scenes, they’re really friendly and I’m enjoying my time here so far,” said KaSing.
TSM’s recent ADC addition Doublelift said KaSing “seems cool” and is looking forwards to playing with him. Doublelift also admitted that he accidentally leaked the news on his stream.
KaSing said he thinks Doublelift is “really, really good mechanically for an AD Carry and has the potential to be one of the best”.
KaSing also added that two years ago he was a bit of a fanboy of Doublelift’s, and thought he’d never play with someone like that. But he says he’s progressed as a player since then and now looks forwards to playing with him professionally.
The news confirms rumours last week that KaSing would join TSM.
KaSing plied his trade in a number of UK teams over the past few years, including Team Dignitas, Supa Hot Crew and more, before moving to H2k earlier this year.
TSM announced big roster changes at the end of season five, with Santorin, Dyrus and Lustboy leaving. It recently announced the addition of Doublelift to its roster.
TSM has also added top laner Hauntzer and jungler Svenskeren to its ranks.
Could this be the start of something special for KaSing, Doublelift and TSM? It’s certainly going to be exciting to have a UK player in one of the biggest and much-loved League of Legends teams in the world.