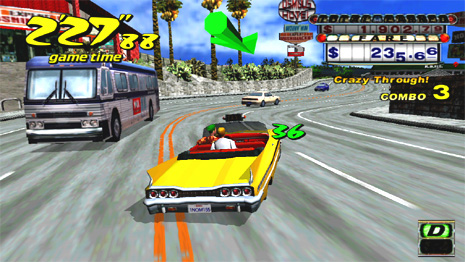 Crazy Taxi has revved its way onto Xbox 360 and PS3, and to celebrate we’ve listed expert tips from one of the top-ranking Crazy Taxi players in the world.
Read on to find out how to drive faster, get the highest fares from your passengers and achieve that legendary ‘Crazy’ $30,000+ score.

1. Go for green
Avoid passengers with red or orange circles around them. They will pay less, require a shorter journey and are generally a waste of time. Go for the smaller, green circles – and if you can’t see any, opt for light green or yellow ones instead.
Don’t let the red circles distract you for convenience’s sake. A good example of this is when you first begin arcade mode. Don’t pick up the first passengers you see – drive past them to find some green rings down the road.
2. Rev it up
Don’t hold down the accelerator button from a standing start. Use a boost instead. To pull one off, hit the Drive button (‘B’ on the 360 controller) and hold down the accelerator button immediately afterwards. For a slightly faster boost, let go of accelerate, shift into reverse (‘A’ on the 360 controller), then hit Drive and accelerate. Practice it a few times to get it.
You should use a boost whenever you get an open road and you are starting to lose speed. But avoiding boosting before approaching a sharp corner, unless you want a fast drift – more on that later.
3. Through the loop
Overtake other vehicles whenever you can, and drive as close to them as possible. Like Burnout, Crazy Taxi awards you for near misses. You’ll get tips in dollars for every ‘Crazy Through’ you pull off, and this will multiply with each consecutive near miss.
If you really want a high score, try not to crash during each customer’s ride. A good area to practice is on the motorway that links the baseball stadium to the fire station. Perfect this and you can quite quickly begin earning tips well above $20 for every near miss. This makes a massive difference to your final score.
4. Drift about
While driving, press reverse then quickly tap drive – while turning. The car should begin to drift and you’ll get cash tips the longer you last, before straightening up. This is not an easy manoeuvre to control but can be handy in larger, open turns. Once perfected, use it to maintain speed through turns.
There is also a little drift glitch trick you can use. When approaching a destination that has a 90-degree wall in relation to your vehicle’s position, approach it as if you would crash into it. At the last moment, drift your car sideways to smash into the wall. If you’re going fast enough, and you hit the wall at the right angle, your taxi will go up on its side and lock up. Sit back, and watch the tips reach crazy amounts. If your customer is running out of time, tap the analog stick left and right to return to normal.
5. Learn the map
It sounds obvious, but this can make a huge difference to your final score. Keep practicing and eventually you will learn where most of the destinations are, as opposed to always following the on-screen arrow, which can muck up at times.
6. Stop with skill

When approaching a customer, don’t just brake. Put your car into reverse while braking and you’ll stop faster. Also, avoid pulling up too fast or crashing into nearby objects which might make your customer dive out of the way, wasting valuable seconds. Park as close as you can to them.
As you drop off a passenger, look out for other people who want a ride. If you drop someone off beside a new passenger, they will swap seats, shaving more seconds off your time. Beware of doing this all of the time – remember, you don’t want red or orange-circled customers. And when pulling away, don’t forget to get off the mark as quickly as possible with a boost.
7. Avoid ramps
This ultimately comes down to personal preference, but I find that the tip or two you get from jumping off a ramp is pointless as you’re more likely to crash into something when landing, thus spoiling your tip multiplier.
The San Franciso-style hills at the start of the arcade map are an exception to this rule. Stay in the middle of the road, boost before a downhill bump and you’ll go flying through the air – and pick up loads of tips along the way. Plus, the car is easier to steer and control because the road is straight.
8. Get high
If you have a passenger who wants to go to the baseball stadium and you are in the heliport area, watch out for a petrol station on your right. As the road descends, don’t follow it. Instead, drift suddenly to the left. You’ll go flying through the air, land in a parking lot and drive just a few hundred metres to the stadium, shaving more seconds off your time.
9. Welcome to Americana
Buy these Offspring and Bad Religion records. They will make you play better. Install them onto your hard drive or play them from a nearby stereo, and turn off the in-game music. Certain songs were found in the Dreamcast original and were meant for this game.
10. Step on it
We may have forgotten to mention this – but you’ll probably want to drive as fast as you can. Avoid hitting the brake unless stopping. Look ahead, watch for traffic and go for it. Good luck.
11. Take the easy way out
Go to options and turn the traffic and time settings to very easy. This won’t affect your overall standings in the online leaderboards.
12. Your tips and scores
Got any crazy suggestions, pieces of advice or high scores to share with other Crazy Taxi players? Please leave them in the comments box below.
Here’s my current score, which I achieved after my third run. Expect this to be beaten soon: 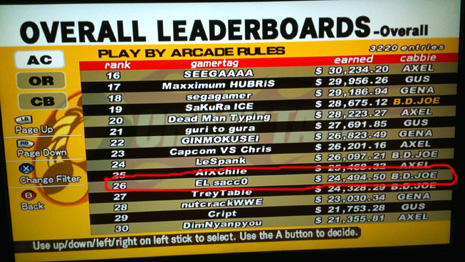 Could Benjyfishy have been a pro LoL or CSGO player? Benjyfishy and MrSavage book reviews - essentia...
Valorant Regional Leagues and Circuits announced for EMEA in 2022, including a UK, Ireland and Nordi...
UK esports winners named at the*gameHERs awards 2021
Dom Sacco

I like this awesome game very much
Puzzle Bubble

For this game on arcadeok?

oo i love this game!