We’re not just about the local scene here at Esports News UK, sometimes we’ll cover the big global announcements (especially if they could affect the UK scene in the future).
The E3 PC Gaming Show was home to several of those announcements today – here’s our roundup of 10 top esports stories from the Los Angeles gaming convention so far.

“Over 20 years in the making… the original esport returns” #BE3
Bethesda announces a $1 million prize tournament for Quake Champions! pic.twitter.com/L7Qgbe28CN

ESL has teamed up with id and Bethesda for a new $1m Quake World Championship for the new game Quake Champions.
Duel (1v1) and Sacrifice (4v4) competitions will kick off this June and culminate in the live final at QuakeCon in August.
Tim Willits, Studio Director at id Software, said: “We’re excited to produce an incredible competition featuring amazing pro player talent, all vying for the million dollar prize pool and the title of the very first Quake World Championships champion.”
More info here.

Lawbreakers, the new game from Gears of War lead designer Cliff Bleszinski, impressed with a brand new trailer (above).
It’s a first-person fast-paced team shooter which has a new launch date of August 8th 2017 on PC and PS4, and a $29.99 price tag. Gamers can sign up to the beta now.
UK streamers Phantasy and FrostFangs also spoke in the trailer above.
What’s really interesting, though, is that there’s a rumour that Lawbreakers will have its own esports leagues in the future.
Phantasy told Esports News UK: “I enjoy Lawbreakers, whether it will be a huge title I’m not sure. I do believe there is plans for some big leagues in the future but that’s just word of mouth. Even if it’s not true I would definitely be interested in this.”
Phantasy also said he may enter the Quake tournament mentioned above, and that he will soon start a new job working for shooter game Battalion 1944 as a community manager and QA.

ESL, Oculus and Intel have revealed the VR Challenger League, a new esports league featuring two new virtual reality games (see below). – “The Unspoken” and “Echo Arena”.
The grand finals will take place at the Intel Extreme Masters Katowice in 2018.
Qualifiers start on July 12th on ESL Play; there will also be weekly ESL Play cups, where gamers can compete for weekly points and prize money.
The games themselves look pretty unique – Echo Arena will also be free for a limited time from July 20th.
The Unspoken: 1v1 mage dueler

Intel and ESL aren’t finished yet. They’ve also announced a new $1m CSGO Grand Slam.
The Intel Grand Slam boasts an additional $1m prize awarded to the first team that can win four out of the last ten $200,000 events held between DreamHack and ESL. The first Intel Grand Slam event will be ESL One Cologne 2017.
Also, should a team with three eligible trophies be defeated in their fourth Grand Final, the opposing team will be rewarded with $100,000. That’s ESL and Intel basically rewarding big upsets in esports.
Once a Grand Slam winner is crowned, each team’s trophy count is reset.

ESL. Back at it again – this time with E3 organisers the Entertainment Software Association (ESA).
They’ve teamed up for a dedicated esports stage on the E3 show floor featuring top players and teams from Vainglory and Quake Champions.
There’s the Vainglory Collegiate Starleague on June 13th, and Quake Champions on June 14th and 15th.

The largest FIFA competition will take place this autumn, where players from across the globe will compete in FIFA 18 to become world champion.
Players can represent their real-life club, take part in Ultimate Team Champion Cups, a new FIFA Interactive World Cup for pros signed to clubs and more.
Players in all competitions will be able to qualify for the new big tournament. More specific details will be revealed soon. 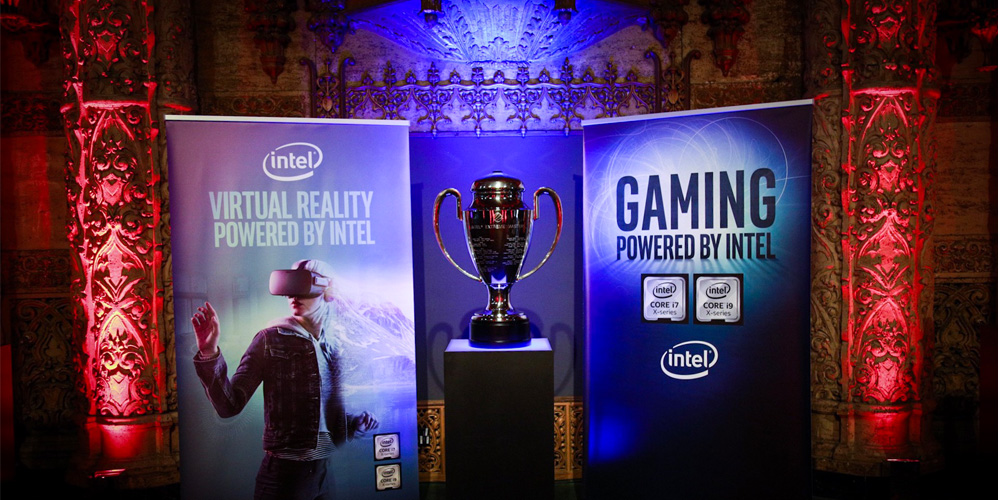 Intel and ESL have entered into a major partnership that will see Intel power ESL’s tournaments, including Intel Extreme Masters, ESL Pro League, ESL One to National Leagues and more.
Intel will provide PCs for all participating teams and players at live events.

I tried so hard, and got VR

It’s not esports but it’s frickin’ Linkin Park, guys. What more do you want?
Linkin Park Destination powered by Spatialand and Intel will ‘help the band extend its social media engagement with fans via a curated experience in VR – from the studio to on tour to anywhere in between’.
Available in July, fans can enter into the VR destination via the Spatialand app to access Linkin Park’s music and interact with the band. So there.