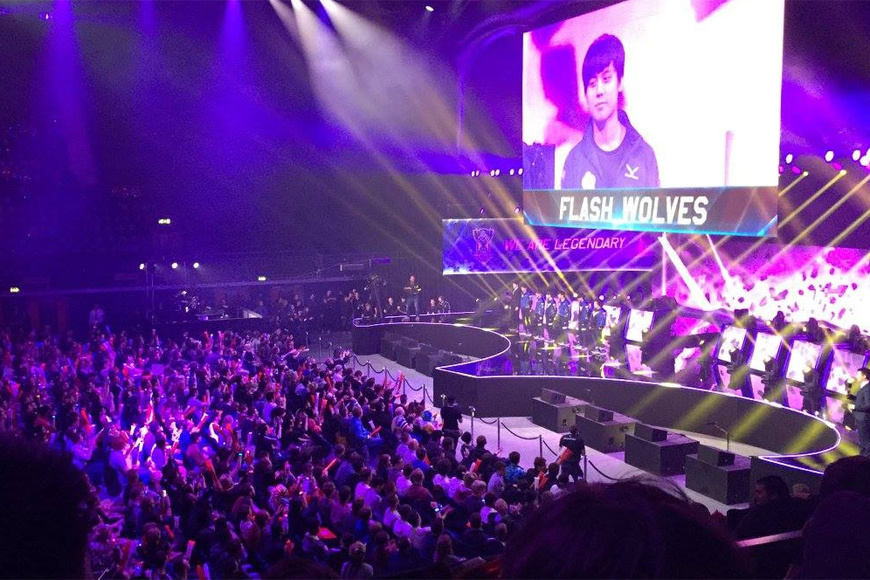 In 2015, eSports and professional gaming competitions were watched by almost 200 million people.
To date, over $200 million has been awarded in prize money, which is increasing year-on-year. It is clearly emerging as a mainstream global phenomenon, but this year has also been pivotal for the growth of eSports in the UK.
Researchers Dr Jamie Woodcock and Dr Mark R Johnson look at what kind of growth UK eSports is making in this exclusive article.

UK eSports’ expansion has been signalled by the launch of the first purpose-built studio by the ESL, the acceptance of the NUEL (National University eSports League) into the
organisation of university and college sports, and the flourishing of initiatives like GameBritannia.
Questions of whether or not eSports should be considered a ‘sport’ now seem far less interesting than debates about its future – particularly as viewing figures are eclipsing many traditional sporting events.
The current eSports market is worth $748 million and estimated to jump to $1.9 billion in just two years. The pressure of this investment, particularly as multinational companies see the potential of advertising to a vibrant and growing community, will drastically reshape eSports over the next few years.
We can learn from the experiences in South Korea, Germany, China, and the USA, and the UK scene can develop in various ways from this point.
The expansion of eSports is an important example of how digital labour, including forms of work and play, is combining in new and innovative ways. It has upset the traditional business model of video games, moving away from the single physical purchase to a much more complex relationship between the developers and community.
As an example of the scale involved, Riot Games had a revenue of over $1 billion last year from League of Legends. A new industry is springing up around eSports involving game developers, tournament organisers, eSports sponsors, teams and coaches, amateur players, streamers and shoutcasters, as well as the professional gamers themselves.
The professionalization of this industry is drawing in and transforming the work of TV filming and production, while at the same time creating new forms of digital labour. In addition there is a process of rationalisation as corporate and advertising interests begin to regulate and formalize the excitement and user-driven community around eSports.
We are therefore beginning to see a further competition taking place behind the tournaments: who will benefit from the growth of eSports?
The tensions between celebrity players, the millions of fans, publishers, and brands will shape the answer to this question over the next few years.

“To date, over $200 million has been awarded in prize money, which is increasing year-on-year. It is clearly emerging as a mainstream global phenomenon, but this year has also been pivotal for the growth of eSports in the UK.”

The rapid growth of eSports and competitive gaming also raises a range of fascinating questions we’re in the process of studying, centred about the creation of subcultures and their attendant languages.
Competitive games rapidly create subcultures in which skill has substantial social capital, whilst distinctive social norms emerge that are unique to that particular community, and players come to self-identify as players of their particular games. Equally, as we’re sure many readers are aware, competitive gaming cultures rapidly develop complex bodies of terminology specific to the game in question.
These bodies of language quickly raise the barrier to entry into competitive games, and serve to delineate the skilled and knowledgeable player from the unskilled player. Irrespective of their actual gameplay ability, the ability to ‘speak the language’ of the game is a crucial part of all modern competitive games (especially for casters).
This raises fascinating questions about how these languages and cultures shape the play of eSports games. Rather than game designers making eSports games which are then played by player communities, we believe that there is a deeper co-construction of gameplay present between the designers and the cultures fostered by their games, and that such a relationship is essential to understand if we are to understand competitive gameplay.
The two authors are pioneering the study of eSports in the UK context as part of the newly-funded Digital Creativity Labs, a major recent research investment located at the intersection between games and other media.
Dr Jamie Woodcock is primarily interested in questions of work, labour, employment and play in eSports and competitive gaming, the tensions inherent within playing a game for a living or at a high-amateur competitive level, the emerging career path of eSports, and the complex ecosystem of actors involved in the community.
The main interests of Dr Mark Johnson – himself a former professional poker player – lie in the nature and experience of highly-skilled gameplay, the many social and technical dimensions of game skill, the emergence of gaming subcultures and languages within competitive gaming communities, whilst sharing an interest in the emergence of the ‘professional gamer’ as a distinctive and rarely formalized career path.
We invite anyone with interest or experience in the field to get in touch with us and help us develop a strong scholarly engagement with this fascinating new area, to help legitimize eSports as an important topic of study in the context of the modern internet and the modern games industry, and help us carry out ground-breaking research in this emerging field.

About the authors
Dr Mark R Johnson is based at the University of York. His twitter is @UltimaRegum and website is http://www.ultimar atioregum.co.uk/about-me/.
Dr Jamie Woodcock is from the Cass Business School in London. His Twitter is @jamie_woodcock and more info can be found over at https://city.academia.edu/JamieWoodcock.

Cheers Man! I was just going through some Overwatch Content and i found this website, im gladly i found it!
Thats a overwatch themed content, i also play
the game and i enjoy it alot, hope we can maybe meet in some quickplay duels and
find how is better? 😛
Congrats on the blog, and keep going on, i have shared it on my social networks and bookmarked this web, bye!