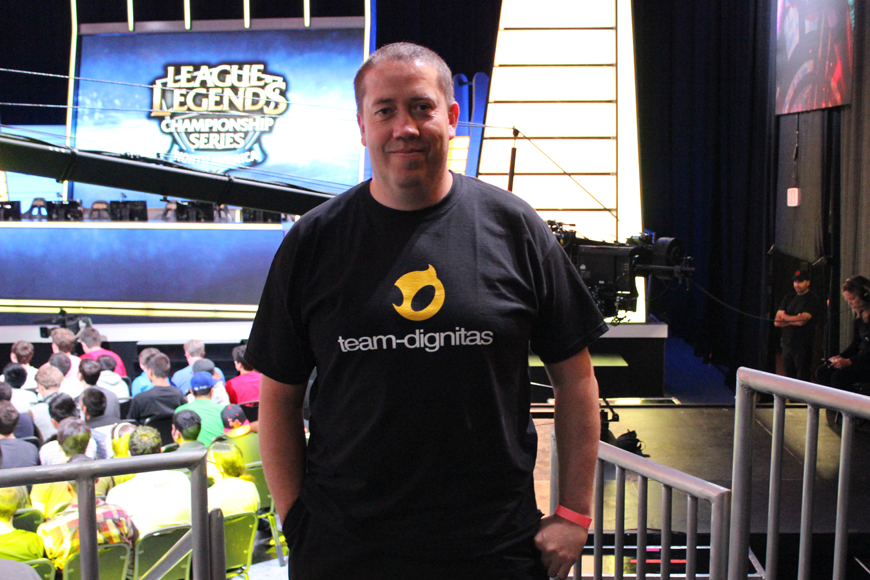 Team Dignitas owner Michael “ODEE” O’Dell has told eSports News UK his League of Legends team will get back into the NA LCS.
The UK organisation’s League of Legends team was knocked out of the North American Championship Series (LCS) yesterday, after losing 3-0 to Team Dragon Knights (TDK) in the NA promotion tournament.
This means that for the first time since the introduction of the LCS, Dignitas won’t be taking part in the competition.
They will now play in the NA Challenger Series in a bid to re-qualify for the LCS at a later stage.
When asked what’s next for Dignitas, and whether he is focused on the long-term, getting back into LCS or if he has other plans in League of Legends, ODEE replied: “Yeah we will get back [to LCS]. Just working out the best way at the moment.
“We will be fine. Our other squads are strong – and we will branch out to two new titles soon. There is a lot more going on.
“[Leaving] LCS is a punch in the face but it won’t kill us.”
After crashing out of the LCS, Team Dignitas posted the following tweet:

Following our LCS NA exit we are reflecting on all options and busy planning our return. Thank you for the support! pic.twitter.com/jdQt56B2rZ

The organisation also shared this image of some of their former League of Legends players, including the likes of Michael “Imaqtpie” Santana, Joedat “Voyboy” Esfahani  and William “Scarra” Li.

Dignitas finished bottom of the NA LCS spring split after winning 4 matches and losing 14.
Last year, Dignitas sold its EU LCS team to Follow eSports in a deal worth reportedly $500,000, with some reports suggesting the final figure was closer to $1 million. The sold team was later rebranded to Splyce.
Riot Games’ rules state that an owner is only allowed to have one team ‘in the professional ecosystem’, so if two teams owned by the same organisation reach LCS, one of those teams must be sold to another owner.
Here’s how players and pros reacted to the news:

Sorry to the fans I played the worst I have ever played GG to @ArenaTDK
— Billy Yu (@BillybossLOL) April 7, 2016

Truly the end of an era, even though the dig team didn’t play well, I never thought I’d see the day where dignitas wasn’t in NA LCS.
— scarra (@dscarra) April 7, 2016

i cant watch this shit anymore i got the blood on my hands im going to bed
— Michael Santana (@Imaqtpielol) April 7, 2016

Sorry to Dig and fans for the loss. Dignitas has been apart of so many epic moments in LoL history, and I’m sure the story won’t end here.
— Joedat Esfahani (@Voyboy) April 7, 2016

Honestly, it’s just sad that a staple team in the LCS like Dignitas can get relegated. I wish there was more protection for legacy teams.
— MonteCristo (@MonteCristo) April 7, 2016