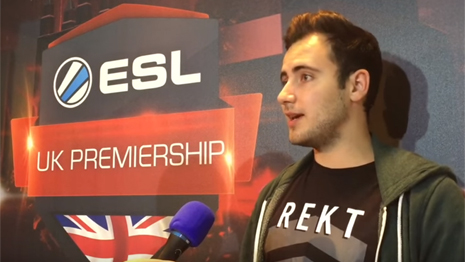 CSGO team United Estonia’s (UE Smash) coach Alex says that UK Counter-Strike teams are a shade of what they once were, and that players must set aside egos to play in more European tournaments, in order for the UK CSGO eSports scene to improve.

Alex was speaking to eSports News UK after his team beat Team Infused in the ESLUK Premiership CSGO Season 2 Grand Final at MCM London Comic Con last weekend.
“UK eSports is a shade of what it was in comparison to the Counter-Strike: Source scene in the UK,” he said. “The UK had some great Source teams, we had players in international mTw teams, we had mouseesports who won Copenhagen Games 2012.
“Now it’s shrunk… I don’t know if egos have suppressed it, I don’t know.
“We’ve come here as an Estonian/UK mix. A lot of people were disappointed that the UK team (Infused) didn’t take the trophy home, because we’re UK by technicality. But we’ve come here, and people have kind of said ‘RIP UK scene’ because we’ve won LAN, but there’s still one team out there to beat in the UK – EZskins.
“I’d like to see the UK scene work together to play in Europe more, because the only way to get better is to play against better players. And those players are in Europe.
“So once the UK scene starts doing that, maybe working together and setting aside all the egos, then maybe they’ll win.”
UK CSGO team EZskins previously said they were embarrassed after their performance at DreamHack London in September.
Check out our full chat with Alex here:

ESL UK has predicted a world-class UK eSports team will emerge in the next two years.