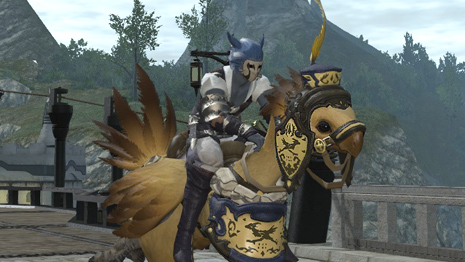 Early on in Final Fantasy 14 (XIV): A Realm Reborn, you’re able to ride a Chocobo for ten-minutes at a time. But you can get your very own Chocobo to use as often as you like from level 20 – and it doesn’t require much work.
Our step-by-step guide shows you how to acquire your very own Chocobo mount in FFXIV (FF14) ARR on PC, PS3, PS4 or PS5.

1. Reach level 20.
2. Complete the ‘Lord of the Inferno’ main questline. This will unlock the ‘Hero in the Making’ quest from the NPC Minfilia. Main quests are marked with a jagged outline rather than a standard circle.
3. You’ll eventually have to choose to join one of the game’s three Grand Companies – Maelstrom, The Order of the Twin Adder or The Immortal Flames. These are not player-made Free Companies (guilds), they’re in-game NPCs (non-player characters) which offer you rewards and extras in exchange for Grand Company seals. You might need to complete ‘The Company You Keep’ quest before you can join one.
4. After choosing a Grand Company, speak to the company’s Commander NPC to start the ‘My Little Chocobo’ quest.
5. You’ll need to amass 200 Company Seals. To get these, you can simply take part in FATEs, duty roulette, complete company leve quests or exchange crafted items to your Grand Company via delivery missions.

Company leves are a quick way of getting seals. If you joined The Maelstrom, head to Moraby Drydocks in Lower La Noscea for these, if you joined Twin Adder, head to Hawthorne Hut in East Shroud or go to Eastern Thanalan’s Camp Drybone if you sided with The Immortal Flames.
6. Once you’ve got 200 seals, head back to your Grand Company location and speak to the Grand Company Quartermaster. Click the ‘Materiel’ tab on the right and select Chocobo Issuance.
7. Head to a Chocobo Stablemaster and trade in the issuance for your Chocobo.
8. Use the item you receive, then open your actions/traits menu and look for your Chocobo Whistle. Put this in your action bar for quick access and click it to summon your Chocobo. Note: you can’t summon your chocobo mount in major cities or dungeons.
9. (optional) At level 30, pick up a quest in Gridania’s South Shroud (Camp Tranquil) which allows your Chocobo to fight alongside you.
10. Viola! Enjoy your very own Chocobo and the classic Final Fantasy riding music.
Alternatively, check out this video which explains how to get a chocobo in Final Fantasy 14: A Realm Reborn: