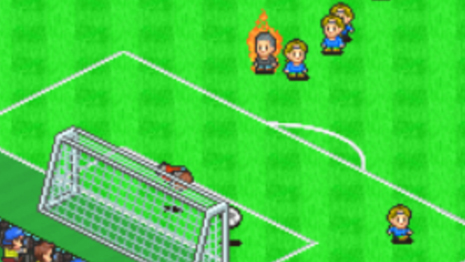 Pocket League Story is an addictive little football management game for your smartphone, but it can be tricky to beat the tougher teams.
We show you how to build a strong squad of the best players in this guide to Pocket League Story.

Hiring the best players
Look out for Superstar and WC (world class) players. These will increase their stats the most when levelling up and applying training techniques. They’ll also be the most expensive, however.
Towards the start of the game you’ll want Exceptional players. Heckum is an ideal midfielder and Jenkinson is a great defender, while Sanders and Mari are decent early strikers, for example.
Superstars can be played anywhere on the pitch, but Bodybuilders make ideal defenders (although they’re slow) and Showboats are decent early on as wingers, as they have high technical abilities and will increase your club’s fame. Spider-type goalkeepers are also recommended. Don’t bother buying Normal players.
One little tip for hiring expensive players is to save the game before attempting to convince them to join you, then if you didn’t get a high persuasion rating, exit out and reload the game (by double tapping the start button on iPhone, holding your finger over the Pocket League Story icon until it wobbles, then hitting the X in the corner to close it down). Then reload the game and try to convince the player to join again. You might get lucky and get a higher percentage. Generally, the best players will take around three or so attempts to hire them, so make sure you have around three or four times their asking price before negotiating.
Have your strikers focus on kick, body and speed stats, your defenders focus on body and speed stats, and your midfielders focus on speed and technical stats. It’s also important to ensure your team has strong body stats in general, as this determines how many tackles they can take before losing the ball. If they’re strong enough, they’ll be able to dribble and pass the ball around more effectively.
Having an S stat in your player’s chosen position is the what you should aim for.
Strengthening your squad
Select Special Practice from the menu and use training techniques to boost the specific stats of certain players (see the section above . It’s not really worth boosting the stats of lesser players or starting players that much, especially after you’ve won a league or a cup. You should instead focus on hiring the best new players and raising the stats of Superstar players, as these will rise the fastest.
Holding Soccer Camp Fan Activity events will let you find better new players, as will winning leagues and cups, and going up ranks (which you can do by winning matches).
Holding Coach Lectures (to find new training techniques) and Team Facilities events (for building new areas) are also important.
Building success
Make sure you have one of each building, as these will net you extra points for fan events, sponsors and training. Research them first and tap the empty areas around the edge of your training pitch to build. Always expand your stadium and training pitches whenever you get the chance. It’s worth researching them to higher levels later on, as this way you’ll get more stats faster.
The more players you have, the more points you’ll earn, however be careful as Superstar players cost a lot to hire and have very high wages. We prefer to stick to a squad of around 15-20 players and let poorer players go each year. You don’t really need to use subs, so don’t worry about boosting their stats too much unless you’re going to use them.
Slow and steady wins the race
Don’t feel you need to take part in league after league, or cup after cup until you win. It’s good to have a break of a couple of months every now and then, so you can develop your squad, hire new players and take part in exhibition matches to gain money and experience.
Bear in mind the game ends in eight years and four months, although you can start again with your players and coach, as well as their raised stats.
Make money
We find the best way to make money is to take part in cup tournaments you’ve already won. Your team will already be good enough to win, and in just three or five matches, you’ll make thousands of pounds.
You can also raise your ticket prices to 20 or 30 (once you’re in the later stages of the game, so you don’t annoy your small fanbase), to earn more money faster.
Choose a formation
We generally found that the standard 4-4-2 formation was best early on, with an offensive strategy. However, once you unlock 4-3-3 B (by hiring the coach called Lewis after one season), you’ll want to use it regularly, also with an offensive strategy. 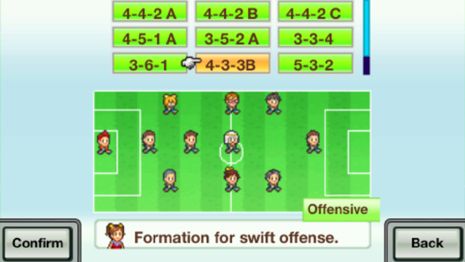 We only really used normal or defensive strategies if we were a goal or two up and wanted to keep the lead in the second half. Put your strongest defenders at the back and front of the defensive area, and your faster defenders on the left and right. Your best overall player should play in the middle, and your most technical players should be either side of him or her.
Your strongest and fastest lone striker should sit right at the front, with two supplementary strikers who are powerful and technical on either side of him or her.
Top coach
It’s tempting to hire a better coach each year, but by sticking with your current coach, he’ll level up, and the experience players earn from the training pitch will increase. We stuck with Lewis and didn’t have a problem finding success.
Use Auras effectively
These can change matches very quickly. It’s a good idea to save a player’s Aura until you’re having difficulty in a match or are about to come up against a tough opponent. Use them if you’re losing by one goal or are drawing or winning by just one goal in important matches.
Try and use them towards the start of a half as they disappear if you score a goal or the half ends. We use an Aura if the current player has the ball and is running down the wing or through the middle. The Aura will often speed him past other players and put him in a goalscoring position.