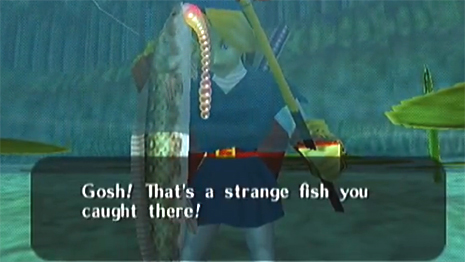 Forget Zelda. Ignore Hyrule. Ganondorf? Pah. We all know the biggest achievement in Zelda: Ocarina of Time is catching the fabled Hylian Loach fish.
Since Ocarina of Time 3D has just been released for 3DS, it’s a great time to catch up on your fishing skills and hook this beast using our walkthrough.

1. As adult Link, head to the fishing pond at Lake Hylia. It’s in the Southern part of Hyrule.
2. Catch a regular fish (around 15 pounds) to get the golden scale from the pond’s owner.
3. Find the sinking lure. Search in the grass on the outer edges of the fishing pond, check out the rocks near the back area or head to the stream of running water there. It can be in any of those locations.
4. Once you’ve found it head back to the pond owner and talk to him. Click ‘Let’s talk about something’ – he’ll let you officially use the sinking lure to catch fish.
5. Locate the Hylian Loach. It’s usually in the centre of the pond, deep at the bottom, slightly towards the back. Use the Zora Tunic and Iron Boots to look for it if you’re having difficulty, but get out of the pond afterwards.
6. Cast your fishing line so the lure rests just behind the Loach. Avoid grabbing the attention of other fish – if you need to move them away, walk around or swim among them to disperse them.
7. Be patient. Try not to wriggle the lure too soon. The Loach will move every few minutes to go up for air – that’s your chance to wriggle the lure slightly and grab its attention. Be prepared to try and try again at this point.
8. If you did it right, the Hylian Loach will follow your lure. Wriggle it a bit more and the fish should bite the hook.
9. Tap the action button like mad to reel it in. If the Loach pulls to the right, move the slider stick to the right, if it moves to the left, tilt the slider to the left.
10. Keep this up and you should eventually land the fish.
11. Head back to the pond owner and he’ll give you a purple rupee which is worth fifty rupees. Not the greatest reward, we know.
12. As punishment for his mediocre gift, you can use the fishing rod to grab the pond owner’s hat. You can dunk it in the water a few times and it will eventually sink. Then you’ll have to pay a fifty rupee fine. But hey, you won’t lose any money if you caught the Loach, and it’s worth it for the comedy value.
Video: Catching the Hylian Loach

Thanks to batman9502 for the video. It’s for the N64 version of Ocarina of Time, but can be used for the 3DS version too.
Have you caught the Hylian Loach? How much did it weigh in your game?

That nasty fish escapes me every time…I’m stupid..

You never were the speaking type, were you Link?

the 3d hurts my eyes xD

Woo caught my first ever Hyrule Loach… Tried catching so many fish today and failed miserably on them all except the loach. Managed to catch it with the normal lure too. Was 33 pounds… 😀