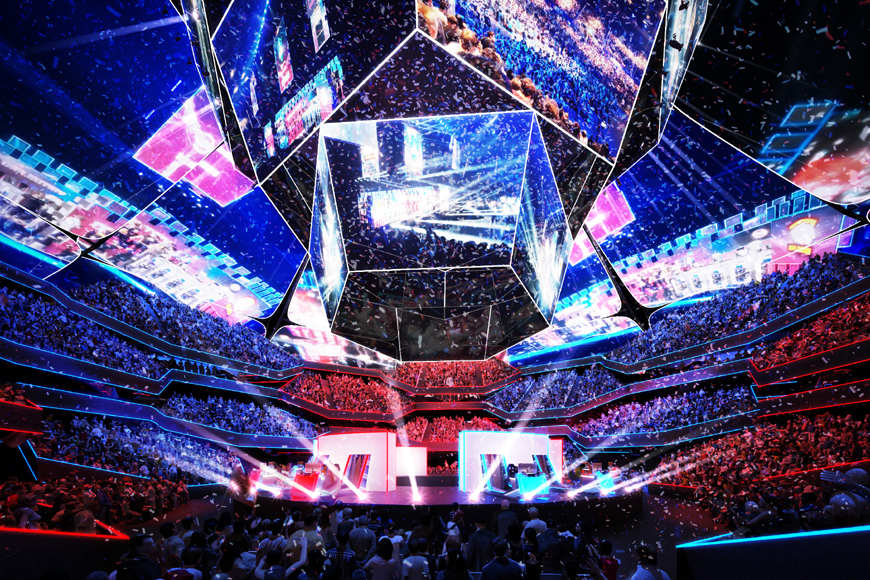 Global design firm HOK and software company SAP have published a new research report exploring the future of esports venues.
Millions of people tune in to watch the top finals/events each year, making esports one of the fastest-growing sectors in the global sports and entertainment industry.
Key design features explored in the report include a non-traditional seating bowl, a more immersive environment, reimagined geometries and spatial organisation and greater intimiacy.
The report also predicts that in the future, esports stadia will have ‘a blending of technology with the built environment’ and hospitality-driven experiences.

“Purpose-built venues have historically had a significant impact in establishing a sport in a culture and community,” said Nuno Guerreiro, an architect at HOK and co-author of the report.
“Because of the length of these events and technological requirements, esports have a unique audience seeking more connected, hands-on experiences. Architects and designers have an opportunity to rethink every aspect of the traditional sports and entertainment environment—from a building’s location and form down to the seat.”
Guerreiro collaborated with Carlos de la Barrera, a senior designer at HOK, and Federico Winer, head of EMEA for Entertainment, to author the report.
HOK’s Sports + Recreation + Entertainment practice has expertise in the design of arenas, stadiums, ballparks, training facilities and recreation centers. For example, recent projects include FC Barcelona’s New Palau Blaugrana, the Mercedes-Benz Stadium and the State Farm Arena renovation in Atlanta, Yas Arena in Abu Dhabi, Rogers Place and the Ice District in Edmonton, Alberta, Little Caesars Arena in Detroit and more.
The report can be found here