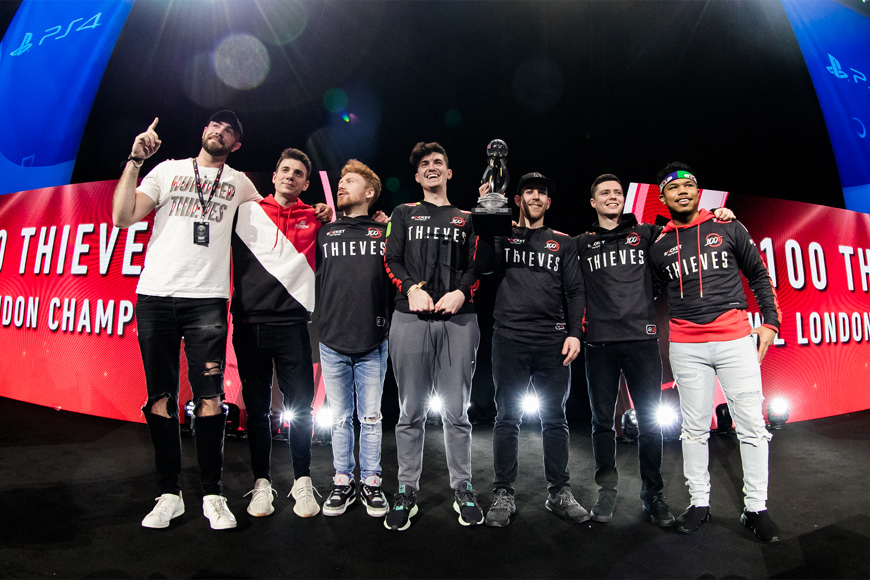 This weekend London’s Copperbox Arena was home to the UK’s only major Call of Duty event of the season: CWL London.
The tournament was held from May 3rd to 5th and had a whopping prize pool of $325,000. After the electrifying atmosphere at CWL Birmingham last year, CoD fans expected big things from CWL London – and it certainly did not disappoint.
Joe Griffin provides a recap.

Following a dominant string of performances in the CWL Pro League, 100 Thieves looked to prove their worth in London. It was only a matter of time before the squad took first place at a major Call of Duty event.
The organisation owned by former CoD pro, Matthew ‘Nadeshot’ Haag, re-entered Call of Duty at the beginning of the season. Emotions ran high after they beat EUnited in a thrilling grand finals match.
Being unable to attend the event himself, Nadeshot expressed his joy on Twitter, stating it was a “dream come true”:

Today was a dream come true, still can’t believe we won a major. Just wanted to personally thank each and every one of you that sent love and support all throughout today. Appreciate it more than you know! @100Thieves ?

100 Thieves faced EUnited in the final. EUnited made a strong losers bracket run, beating Envy and Optic Gaming. They would need to beat 100 Thieves in two best-of-five series. But EUnited failed to force a second series and 100 Thieves won 3-1 to close out the tournament.

UK Call of Duty events are gaining a reputation for their passionate crowds and roaring atmosphere. From Neil Diamond’s “Sweet Caroline” to the constant and spontaneous chants, the London crowd kept the volume ramped up throughout the weekend.

What are the odds that Sweet Caroline comes on, it’s never an event without Neil Diamond… pic.twitter.com/J5z7chLRl3

Many competitors at the event acknowledged the sheer passion of the UK crowd and how it affected them on stage.
CWL caster Ben ‘Benson’ Bowe felt that the crowd was the “most electrifying” in Call of Duty esports history:

CWL London was the most electrifying crowd in CoD eSports History.

Head of League/Event Ops at MLG, Adam Apicella, was in agreement with Benson stating on Twitter “this is our best crowd ever”.
Perhaps all this hype could see the UK host more major CoD tournaments in the future.

There were great expectations for Team Reciprocity as they played in front of their home crowd. Despite the non-stop support for the Brits, they only managed a 7-8th placing, taking home a prize of $7,500.
UK team Kairos Esports made it to the grand finals of the Open Tournament where they played Mindfreak (pictured, below) .
Kairos’ squad consisted of familiar faces: Joshh, Nolson, Weeman, Cammy and Defrag. However, the Aussies proved too strong for the Kairos lads as they defeated them in two best-of-five series. WORK TO BE DONE

There is still plenty of glory to be had for these teams, with many events still left in the season including the CWL Pro League (Feb 4th- July 5th), CWL Anaheim (June 14-16th), CWL Finals (July 19th-21st) and of course the CWL Championship.

Resolve withdraw from League of Legends NLC circuit
Esports is becoming a prospective niche for the crypto industry
Interview with UK CoD player Zer0 on rejoining the London Royal Ravens: 'This team has some of the b...
Subscribe
Login
0 Comments
Inline Feedbacks
View all comments