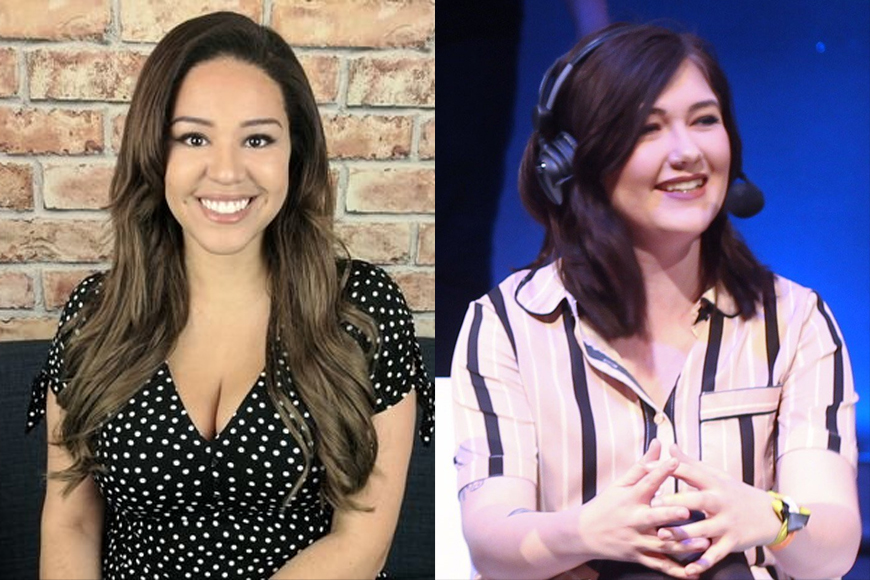 Heather “Naysayerz” Dower (pictured right), esports host, personality and presenter of Ginx TV’s Daily Download, has moved across to ESL UK.
She takes the position of marketing and communications manager at the company, and will oversee the promotion of ESL tournaments and initiatives in the UK, including the ESL Premiership. Heather will also support UK talent at international events such as IEM Katowice.
As Heather departs Ginx, Elle Osili-Wood (pictured left) has been announced as the new presenter of the Daily Download show, which airs at 2pm on Sky channel 470 and Virgin 290.
Elle has worked for the likes of Channel 4, ITN and The Times, and has made appearances on BBC Breakfast, carried out red carpet reporting for the Vue Film Show and more.

I’m incredibly excited to announce that I’m joining @GinxTV as the new presenter of the Daily Download! Tune in weekdays at 2pm for everything esports, on Sky 470 or Virgin 290. pic.twitter.com/vIfHRy3u4e

Heather began her esports career in 2011 casting CSGO, and soon became a well-known face and host at UK esports tournaments and events, including Insomnia tournaments.
“Her contribution to the industry, affiliation from grassroots to pro-level esports, and experience in marketing and communications, made Heather the outstanding candidate for the role,” said James Dean, UK managing director at ESL. “We’re extremely excited to have her join our team.”
Heather commented: “I’m thrilled to join the well-oiled machine that is ESL UK. They are doing esports right, running excellent tournaments and supporting grassroots teams. I’m really excited to bridge the gap between the community and ESL and, in my new role, to help share their success stories.”

I was extremely lucky to have been offered many esports jobs from different companies at the start of 2018
But now I can finally reveal where I am going!
I will be the Marketing and Communications Manager for @ESLUK
???https://t.co/OBKiV3SKvb
— Nay (@Naysayerz) 6 February 2018

Heather and Elle hosted the Daily Download together earlier this week.