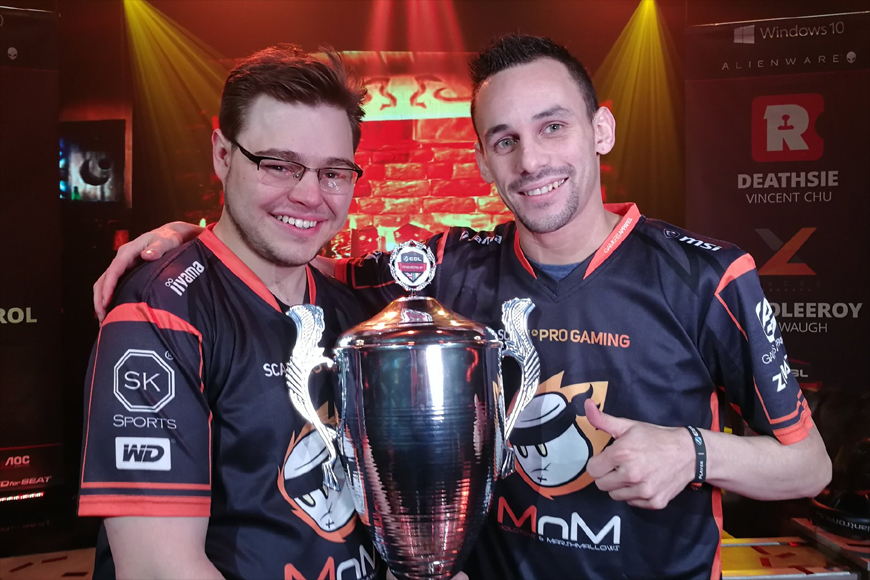 UK esports organisation MnM Gaming have got off to a great start in 2018.
They finished on top in the ESL UK & Ireland Premiership finals on the weekend, with MnM players Ben “BigBen” Chapman (left) and Alister “Mysterious” Kerridge (right) finishing in first place and third place respectively.
A mention should also be given to Digital Warfare, who came close to picking up their first ESL Prem victory.
Their player – Kieran “Toastmonster” Kane – beat Mysterious (who reaches his one-year anniversary with MnM this month) 3-1 in the lower bracket final, and went on to beat BigBen in the first best-of-five final.
But after the bracket reset, Toastmonster was defeated by BigBen 3-1 in the grand final.
It was a solid weekend for UK Hearthstone, with the ESL Hearthstone attracting more than 10,000 viewers.

On clinching the victory, Big Ben and MnM Gaming said:

I’ve been close so many times, but to finally have a trophy means so much to me. I couldn’t have done this without my teammate @Mysterious_HS who came 3rd, this was a team win. There are too many people to thank, but know I appreciate it. Except even more in 2018 pic.twitter.com/teKtvJLTDu

We couldn’t have asked for anyone else to represent us.@BigBenHS wins the #ESLPrem Autumn Finals. It doesn’t stop there as it couldn’t be without the help and effort of @Mysterious_HS who finished 3rd.

Couldn’t be happier with Ben and Mysterious as our Hearthstone players in our first venture into the scene.

Its not said a lot but let’s make make esports sustainable. Its not just about winning and growing, but as an economics major it’s about sustainability for me.
Come 2018 pic.twitter.com/JvqDXczWsv
— KalKal (@KalKalCS) 6 January 2018

Super proud of my results today, had some very tough turns and even a missed lethal because I went too late with Lyra animations. 2-0 and guaranteed 3rd place is the most I could have asked for for my first time on stage!

The full standings can be seen below (image courtesy of ESL UK’s website):