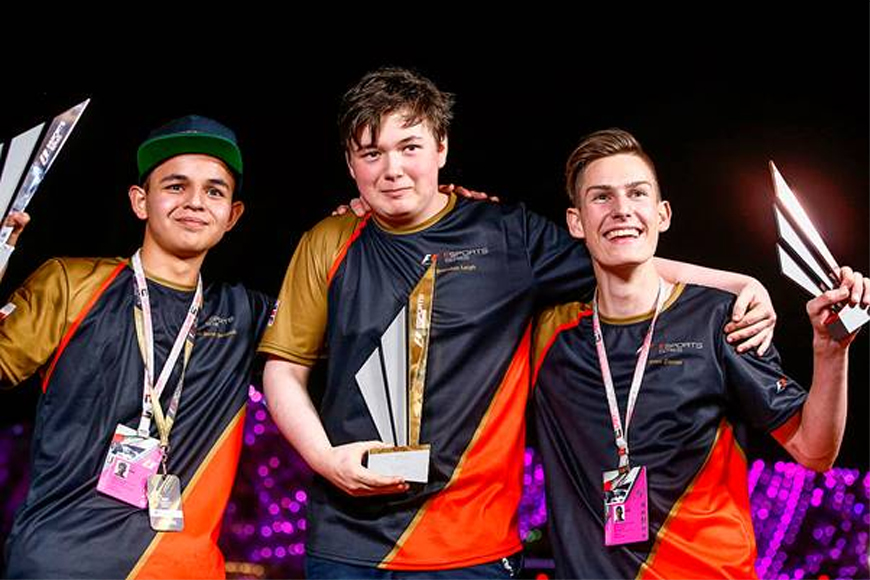 18-year-old Brendon Leigh has been named the first-ever Formula 1 Esports Series World Champion.
The British esports player won the Series final event, held on Saturday November 25th in the F1 paddock at the Abu Dhabi Grand Prix.
Leigh collected a total of 74 points across the three races – Montreal, Spa Francorchamps and Yas Marina – six more than Chile’s second-place Fabrizio Donoso Delgado, and ten more than Germany’s Sven Zurner who finished third.
Brendon Leigh, who works as a kitchen manager from Reading in the UK, was one of four drivers who started race three at the Yas Marina Circuit, knowing that a win would guarantee them the title.
Donoso Delgado had one foot on the top step of the podium until the final lap, when Leigh swept past him to snatch away the race win and the championship.
Leigh led the standings overnight after his Montreal victory on Friday in race one, but a poor performance in qualifying saw him starting in 15th place for race two earlier on Saturday. He recovered at Spa-Francorchamps to finish eighth.
Starting second for race three at Yas Marina Circuit, Leigh was quick off the start line, passing pole-sitter Donoso Delgado to take the lead just after lights out. Zurner joined the pair in a topsy-turvy battle for the lead, but just as it seemed that Donoso would prevail, Leigh’s dramatic last-gasp move shot him to the front and towards a place in the record books as inaugural champion.

“Winning here means a huge amount to me, I am the first one to do it. That is special. I am not sure how to celebrate. I don’t drink or anything – I think I might just go to bed.”
Brendon Leigh

Brendon Leigh said: “I feel ecstatic. It’s one thing to get to the semi-finals, another to get to the finals, and another again to win and beat 19 drivers.
“It’s unreal to have the luck and also the mindset to be able to keep calm in this situation.  Winning here means a huge amount to me, I am the first one to do it. That is special. I am not sure how to celebrate. I don’t drink or anything – I think I might just go to bed.”
After the races, the top three drivers were presented with their trophies by former F1 driver David Coulthard. On Sunday November 26th, they were honoured by Formula 1 Chairman and CEO Chase Carey during an official prize giving ceremony, which took take place on the podium of the Abu Dhabi Grand Prix.
A special prize went to edriver Denmark’s Mads Soerensen, who set the fastest lap in race three. He presented the DHL Fastest Lap Award to Lewis Hamilton, his favorite Formula 1 driver.
Fans watched online through Facebook and Twitch, and it was shown on TV via several different broadcasters.
Sean Bratches, commercial director at Formula 1, added: “The attraction to a broad and committed younger generation of F1 and esports fans is something that we are proud to support and nurture, and we look forward to establishing a season long series in 2018.”
The news comes after the winner of McLaren’s separate World’s Fastest Gamer tournament was announced.