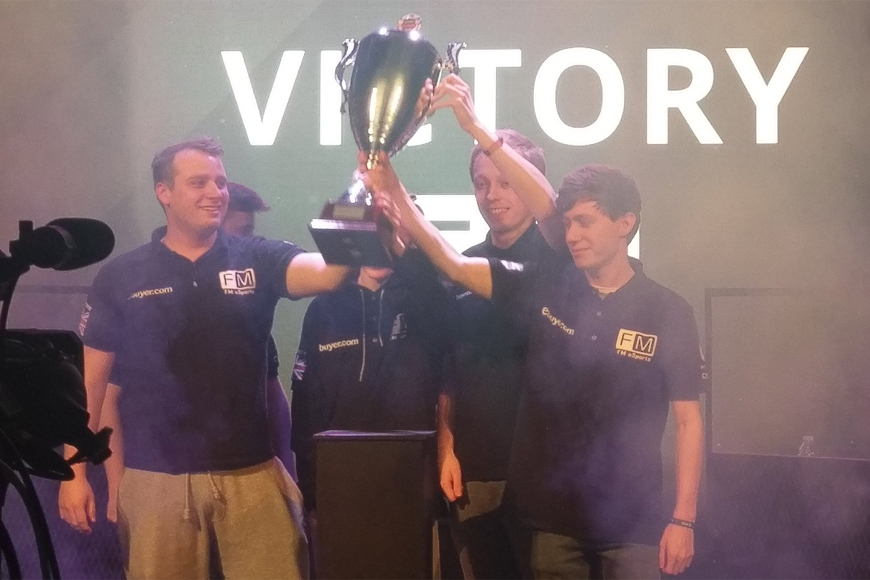 David Hollingsworth provides a comprehensive recap of the ESL UK and Ireland Premiership CSGO spring 2017 split final between FM-eSports and MnM Gaming.
It seems like only yesterday I sat down on a cold Kentish night to watch some of the UK’s and Ireland’s finest CS:GO talent, seven weeks later here we are in the ESL One Studio in Leicester, home of the ESL Premiership.
Our finalist are Premiership top place side FM Esports and second place side FIsh123 who had been picked up by UK organisations MnM Gaming in the build up to the finals as MnM looking to grab the CS:GO & LoL Premiership double.
Only one side can leave Leicester as Premiership winners, will it be favourites FM Esports or will MnM take the inspiration of the city and achieve underdog glory to become Premiership victory.

FM Esports looked in Cache as their first map pick, rather than their favoured map Mirage. While it may have seemed like a mistake to not front load the series with your best map, FM Esports showed that was absolutely not the case.
A big pistol win on the T side by MnM and a 3k secured by Robiin. MnM took the opening three rounds of the series, FM Esports took the series back in their favour in round four and never took their foot off the pedal. Picking 16 rounds in a row including the T side pistol, it was a dominant first map by the top spot side.

MVP – Frei – A clean game from Frei, crucial in key moments and a catalyst for his team’s victory.

FM took pistol before MnM clawed back the next two rounds, the fourth round went to FM who caused a reset to the MnM economy.

A series of back and fourth rounds followed with both teams staying close through the half, but MnM took the final round of the half as they take one round advantage into their T side leading 8-7.

MnM started T side well with a pistol round win and clinched the second round of the half before FM took the bomb defuse to claw back one round in the half.

MnM continued their dominance taking the next few rounds to bring the series to 9-13 in their favour. FM started to come back in the round, as they grabbed three rounds in a row but MnM took it to 11-15 and took the match point.

FM Esports brought it back to 13-15 and refused to go down without a fight, the comeback reached its breaking point as FM tied up the series 15-15 and took us into Overtime.  MnM clinched the crucial first round in the second half of Overtime to bring the series tied at 17-17 with two rounds remaining.

FM started Overtime as they ended regular time, with two clean rounds to bring the series 17-15 in their favour.

MnM finished off the first half with a round of their own as they went on to clinch the crucial first and second rounds in the second half of Overtime, to bring the series to 17-18 with one round remaining. They couldn’t seal the victory as FM grabbed the plant and took us into second overtime!

MnM secured the first round of OT2 but FM pulled back the next two rounds and ended the first half of OT2 19-20 to FM.

MnM managed to take the first round on the T side, with FM restarting after taking a tactical pause a massive play from Frei to rush up mid to secure two crucial kills.

This gave FM the match point. FM kept up the momentum and ended the second map 22-20 after two overtimes!

MVP – Puls3 – Puls3 had a great map, he was consistent which is exactly what you need when you have to play 42 rounds.

FM headed into map three with a series point, starting from the CT side they could not have asked for a better scenario.

Picking up the pistol round and following it up by taking the next four rounds to gain early dominance on the map. MnM fought back to gain two rounds but FM brought the map to 9-2. MnM brought in another two rounds in the half but it’s FM who ended it with an 11-4 lead.

MnM picked up the pistol round in the second half and ran with the momentum, clinching the opening five rounds in the half and bringing the map to 11-9.

MnM and FM traded rounds until MnM turned the game on its head to take the map 12-16 to MnM. A game of who had the less poor T side.

MVP quix –   It could have gone to a number of players but quix is the most deserving on the MnM side, with the most kills and best ADR on his team.

FM won pistol and used that early pressure to claim the opening 10 rounds, setting MnM with a real challenge. MnM had a fightback and clawed back four crucial rounds as they looked to hold onto the hope of winning the series, but sadly for them, FM took the last round of the half giving MnM a huge task on the T side as they tried to reverse an 11-4 deficit.

FM showed dominance on their T side and continued to dominate on the CT side of the map. Winning the opening pistol and the next X rounds, after inserting the knife in the back of MnM in the first half, the second half they gave it a twist and drove home the killing blow the take the series 16-5 and claim the UK CS:GO ESL Premiership title.

THERE IT IS – @FMESPORTS are The ESL Premiership Spring 2017 Grand Champions! pic.twitter.com/MT94ttlG2a

MVP – Weber – Joint KDA with frei but with a higher ADR and key plays in a dominant series.

In conclusion: FM the deserved victors but MnM gave a good account of themselves

Unbeaten in a series throughout the UK Premiership, only losing three maps over the course of a seven-week series and a LAN final, a record of 18-3 on maps.

FM Esports’ dominance of UK CS:GO is clear, adding this title to their UK Masters victory at i59. FM Esports will be proud of what their team achieved this split.

MnM gave a good account of themselves over the course of the final, even with the mixed roster for the final and being picked up by the MnM organisation, they can build on what they have learnt and reclaim their Summer title.

Series MVP – Stan1ey – Big plays and clutch moments get you the retweets but it’s kills and damage that shut down teams. With the most kills and highest ADR of his team, Stan1ey performance is one to remember.

Honourable Mention – robiin – Although his team lost the series, robiin ended the series with a positive KDR in every map and the second highest kills of any player, robiin was a shining light for MnM.