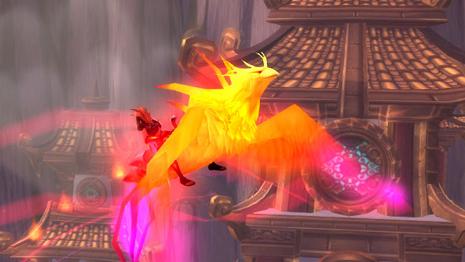 Hooray – flying mounts are finally coming back to World of Warcraft (WoW). Well, sort of – Blizzard has dangled the carrot yet again.

Up until now the developer had not allowed players to fly on their mounts in the latest Warlords of Draenor (WoD) expansion at all, even if they had reached the max level 100, instead saying that “it made the world feel smaller”, “detracted from gameplay” and “trivialized combat”.
While that begs the question ‘why add it in the first place?’, reaction was mixed, with some players liking the idea of everyone being forced to travel on foot and play together more (not that this even happened, what with player garrisons and all, but that’s another story).
Blizzard originally said it would add flying back in for level 100 players in patch 6.01. However, when the patch came, it changed its mind, saying it would rule out flying altogether in WoD. But taking it away completely had flustered some WoW players (myself included), who felt it was silly having all these fantastic flying mounts and not much reason to use them in the latest expansion.
Now the developer has done a U-turn and has confirmed on its website it is bringing flying to WoD after all. Kind of.
In an upcoming Public Test Realm build, after patch 6.2 lands, players will be able to complete a new multi-part achievement called Draenor Pathfinder to unlock the Soaring Skyterror flying mount.
You can do this by exploring Draenor’s zones, collecting 100 treasures in Draenor, completing the Draenor Loremaster and Securing Draenor achievements, and raising the three new Tanaan Jungle reputations to Revered. That will involve a good few weeks of solid play time – or months if you’re a casual player – at the very least.
But that’s not everything. Completing this achievement won’t hand you instant access to flying in WoD. You’ll then have to wait for a small follow-up patch, and when that goes live, those who have earned Draenor Pathfinder will unlock the ability to fly in Draenor (this is account-wide and will unlock flying for all your characters above level 90).
“We believe this strikes the right balance between ensuring ground-based content lives up to its full potential, while providing players who’ve already fully experienced Draenor’s outdoor world extra freedom to break the rules,” said Ion Hazzikostas, Lead Game Designer on World of Warcraft.
“This also provides a general blueprint going forward for content to come. Players will explore new and undiscovered lands from the ground, and then once they’ve fully mastered those environments – a notion that continues to evolve with each new expansion – they can take to the skies and experience the world from a new vantage point.”
You won’t see thousands of players in the skies at once – only a select few to begin with – which will make flying feel special again and encourage non-flyers to unlock the ability for themselves.
Blizzard has dangled the carrot in front of its playerbase yet again – and I don’t think this is a bad idea. It’s actually been a key part of Blizzard’s strategy for World of Warcraft and it works (see that shiny mount? Get to level 40. Want epic purple gear? Start raiding. Need some gold? Farm for it).
What I like even more is the fact that Blizzard has made a brave yet strange decision by preventing flying in the latest expansion, listened to its audience’s reaction, and made a slight change that will appease both types of fans: those who want to fly in WoD and those who don’t.
Blizzard is learning the art of compromise – and that can only be a good thing for World of Warcraft going forwards.